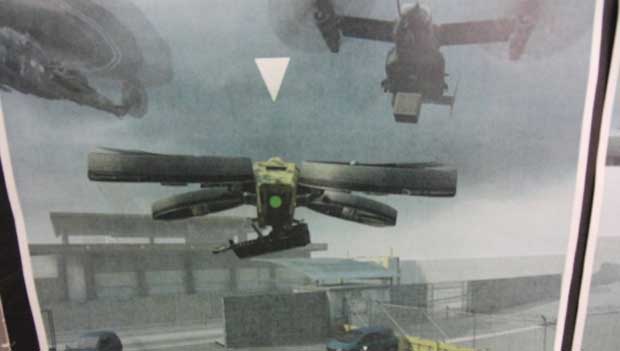 Earlier this week a video went viral that contained a rumored killstreak from the upcoming Call of Duty: Black Ops 2. The QuadRotor is said to be featured in the next game, and was demonstrated in video form. A production video recently surfaced that showed images of the QuadRotor in testing and development, most interesting through is at the very end of this video, you can see some concept art of the QuadRotor weapon in-game in screens that alledge to the next Call of Duty.

The images can be found at the Reel EFX website, but YouTube user MrRoflWaffles has broken down the imagery in a recent video.  You can skip to around the 4:00 minute mark to see the images that are thought to be the first for Call of Duty: Black Ops 2.

Whatever the next Call of Duty title ends up being, it will be revealed to the world shortly.  Activision is set to debut the title during this year’s NBA Playoffs on TNT.