Black Ops most popular weapon is the MP5K 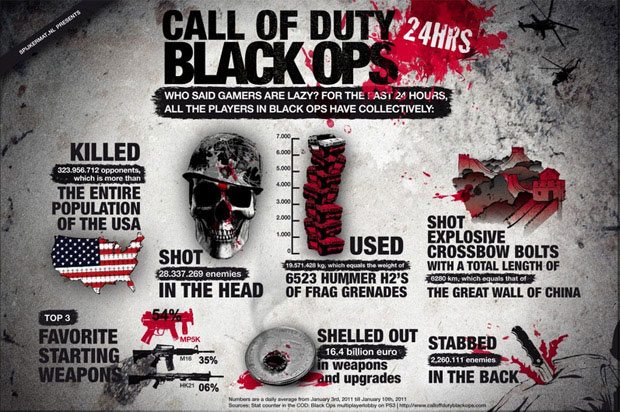 Did you know the most popular weapon in Black Ops is the MP5K?  Well if you had been paying attention to all of that information scrolling across the bottom of the screen in Call of Duty Black Ops you would.  Like Spijkermat for instance, they are a great example of someone that IS paying attention.  And not only paying attention, they are making awesome graphic art out of the information.

A number of interesting facts are pointed out in the graphic but most importantly we find out that Call of Duty: Black Ops players are really putting together some impressive feats when broken down into easily quantifiable info like this.

That or there is some serious time wasting going on here.  Like your girlfriend, she might think you are just wasting time playing Black Ops.  But now you can tell her that you were a part of something special when you played COD for 5 hours instead of watching Dancing with the Stars.