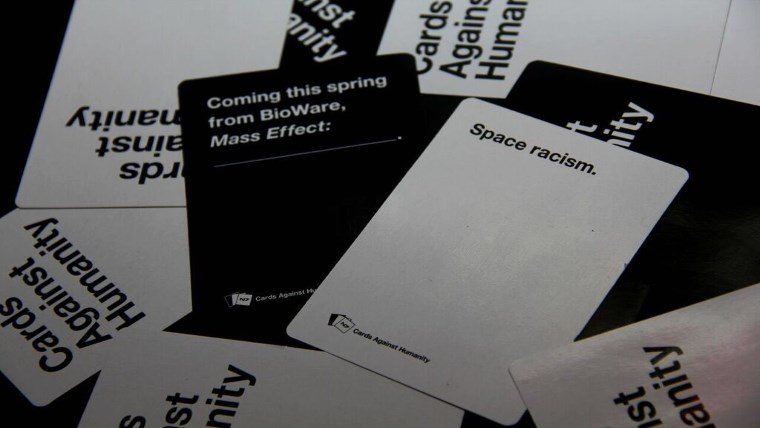 If you’ve been to a party in the last five years or so, you’ve almost certainly become well acquainted with Cards Against Humanity. The adult card game has become a global phenomenon, selling millions of units, and holding a near perpetual spot on the Amazon Best Seller list. The game has expanded multiple times, sometimes with themed packs, and now they’ve teamed up with Bioware to deliver a new one. The Cards Against Humanity Mass Effect Pack.

The announcement, of course, was not without it’s own jokes. Cards Against Humanity described the set as “The Mass Effect Pack is a collaboration between Cards Against Humanity and BioWare — 14 brand new cards* about valuable intellectual property: Mass Effect. We thought if we wrote a pack with BioWare, they would let us play the new Mass Effect game early. That did not happen, but here we are anyway. Claim your limited–edition pack for $1 (including U.S. shipping) now. Our brand synergy is ‘out of this world.’ Missing cards to be sold later as DLC.”

Just from the one picture provided of the Cards Against Humanity Mass Effect Pack the set will include a “Space racism” card, as well as a prompt card for “Coming this spring from Bioware, Mass Effect: ________”. Seems like some good additions to the game, if you’re a fan of the series.

I’ve drifted away from Cards Against Humanity lately, but this pack would be great to have, so it seems worth the buck.