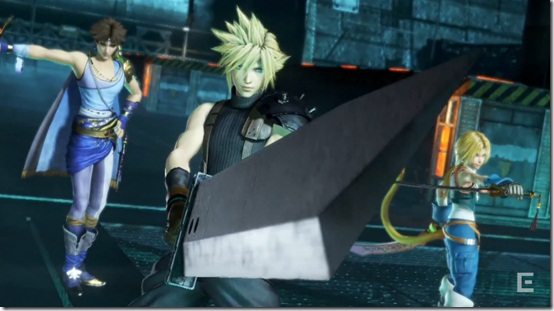 Final Fantasy 7 fans already saw what Cloud could do earlier this month in the latest Nintendo Direct. This is because he was announced to be a part of Super Smash Bros for Wii U and 3DS. This was a momentous occasion because he’s never appeared for Nintendo before.

Before he appears in that game, Cloud will be a part of Dissidia Final Fantasy. The game is due out in Japanese arcades from November 26th, 2015. It is a reboot of sorts that has new graphics that look far better than the PSP originals.

The trailer has a remixed version of the Final Fantasy 7 battle theme plus shows off all of Cloud’s iconic move set. Much like we saw in Super Smash Bros, there is a stage in Dissidia Final Fantasy set in Sector 7 too.

Dissidia Final Fantasy will also have several other famous characters from the long running RPG franchise too. The only thing that hasn’t been confirmed yet is a console version. Hopefully Square Enix considers porting the game onto consoles in the near future.