Corrin, Cloud, and Bayonetta Amiibo Revealed with Two Versions Each 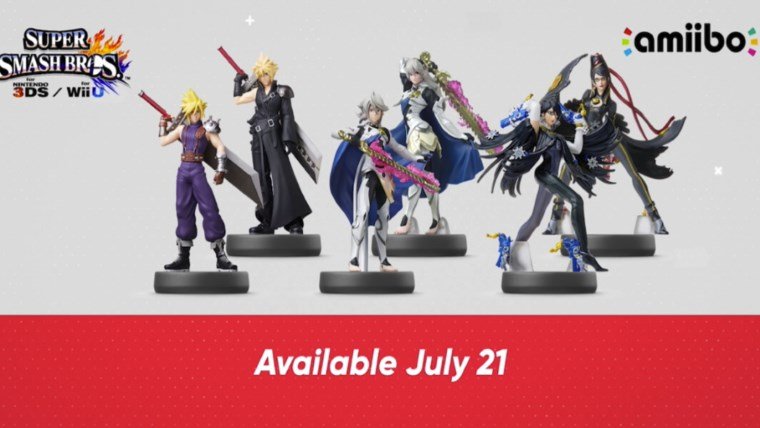 Nintendo amiibo fans have been waiting a really long time to receive what was thought to be the last three figures in the series. During today’s Nintendo Direct presentation they finally got their wish, and then some. Nintendo revealed the Corrin, Cloud, and Bayonetta amiibo figures, along with special alternate versions for each.

Arriving July 21st, right alongside the new Splatoon 2 amiibo that were shown off during the same presentation, these six amiibo will likely be the last ones for the Super Smash Bros. series. Unless, of course, Nintendo decides to release second versions for all of the previously released figures as well. That would pretty much bankrupt most die hard Nintendo fans, but if it means more awesome amiibo then they probably won’t mind (I know I won’t).

Amiibo began with the Super Smash Bros. series, and quickly became a massive hit. Figures launched and sold out regularly, with many becoming highly sought after collector’s items. Things have calmed quite a bit since then, with most figures hitting the market and being easily purchased, but stock issues do still pop up every once in a while.

Will these six new figures be tough to find? It feels like they might, especially with the retailer exclusive second versions. Pre-orders have begun for some, but most retailers haven’t gone live just yet. If you’re a rabid amiibo collector then be sure to check all the usual places so you can secure all the figures that you want.

While this might be the end of the Super Smash Bros. amiibo line, the entire figure line is still going strong. Along with the aforementioned Splatoon 2 figures, Nintendo also announced new Zelda and Pikmin amiibo. Check out the video below to see everything that was announced today, along with more info on upcoming Switch and 3DS games.