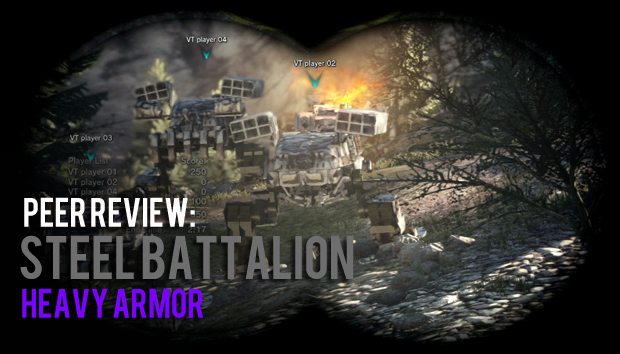 The first hardcore Kinect title has arrived for the Xbox 360 with Steel Battalion: Heavy Armor, but Capcom’s motion-controlled efforts have fallen flat with critics.  Glaring problems with the motion controls seem to be the major gripes that most reviewers have had.  Here are a selection of reviews that arrived following the game’s launch earlier this morning. You can find our review of Steel Battalion: Heavy Armor for the Xbox 360, here.

The Controller Online – 70/100 – Under some really shoddy Kinect controls, Steel Battalion: Heavy Armor is hiding a great game. An intense, mature and very well told story teams up with strategic gameplay in a way that makes you want to keep playing. No matter how many times I threw my hands up in frustration and cursed the Kinect, as my VT exploded around me, I still wanted to play. If there were an option to disable the Kinect controls I would have no trouble recommending Heavy Armor. As it stands, I’m torn.

OXM UK – 70/100 – The new Steel Battalion is going to divide people, in case you hadn’t guessed. Some players will choke on the interfacial blunders, gag at the sporadically entertaining missions and walk away calling it the worst game ever. Others, however, will regard even the flaws as a thrown gauntlet. For years, Kinect nay-sayers have lamented the shortage of challenging motion-sensitive titles, yet complained in the same breath that motion controls are too much bother. From Software’s latest exposes the hypocrisy of that standpoint in one, bone-shattering gesture.

Digital Spy – 60/100 – Steel Battalion: Heavy Armor is the first genuine hardcore Kinect game, something that makes it so much more appealing. Despite some flashy visuals and a hard as nails single-player mode, there’s a sense that Heavy Armor would be a little dull if played exclusively with a controller. The use of Kinect makes it a much more immersive experience and adds an extra few layers of depth. The difficulty level won’t be to everybody’s taste, and the controls take some getting used to, but if you’ve got Kinect and want to test your mettle, Steel Battalion: Heavy Armor is the game for you.

Joystiq – 40/100 – There are worthwhile ideas in Steel Battalion: Heavy Armor, and those hoping to glimpse the possibilities of Kinect should definitely try it, but I can’t in good conscience wholly recommend it.

Games Radar – 30/100 – Probably the most unpardonable sin here is that there is nothing in Steel Battalion that can’t be pulled off a hundred times better with a controller. We mentally mapped out the control scheme – lowering the periscope, looking around the cockpit, standing up and looking out the hatch – and ended up with a couple of buttons to spare. So it’s worth then asking, what’s the point of the Kinect controls?

Game Informer 30/100 – Heavy Armor’s retro-future setting lends itself to a few cool moments, such as a section where your squad has to navigate through a damaged tunnel. If you fire off too many errant shots during battles against the Asian Empire, the tunnel collapses and the mission is over. You’ll travel the globe during the campaign, though these changes of scenery (and the variety of missions, which also include convoy escorts and quiet stretches based on sheer navigation) don’t fundamentally fix Heavy Armor’s fatal flaws.

The Verge – 10/100 – For what it’s worth, I’ve never had problems like this with a Kinect game. I reviewed bothThe Gunstringer and Kinect Star Wars and though the former made far better use of the tech than the latter, that had everything to do with design and nothing to do with technology. From Software has built a Kinect game around sitting and small gestures, and those happen to be the two things Kinect is just the worst at (though to be fair, I’ve never heard its singing voice or tasted its cooking).

Kotaku – 0/100 –  The best Kinect games so far have mined the cognitive dissonance inherent to controlling games with the Xbox 360’s motion-sensing peripheral. With The Gunstringer, it was turning your gestures into the vengeance of a bad-tempered, undead cowboy puppet. And in Child of Eden, your swipes, pushes and claps opened up a beautiful, hallucinatory mindscape that grew ever more trippy and lush. Those games took the silliness of standing in front of a fancy camera and waving your hands to play a game and made you feel either ornery or awash in sensation. Steel Battalion: Heavy Armor takes that silliness and makes the player feel like the butt of a joke. No one gets a medal for delivering that kind of game.