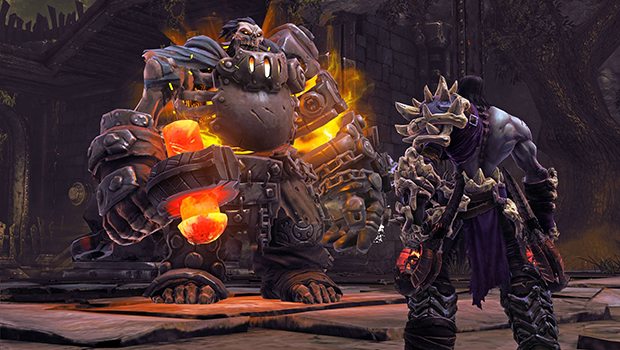 There’s more Darksiders II DLC on the way, according to a press release from THQ. The Abyssal Forge expansion will introduce “a vast swamp-like Shadow Lands” to the world of Darksiders II, that includes two new dungeons, new enemies, and legendary loot to discover.

Abyssal Forge is said to be the most challenging combination of enemies and puzzles to date for the game, and will arrive on the PlayStation 3, Xbox 360, and PC on October 31st.

The Darksiders II Abyssal Forge DLC will be priced at $9.99 or 800 Microsoft Points.

ADVENTURE INTO THE ABYSSAL FORGE WITH DARKSIDERS II EXPANSION PACK

The Abyssal Forge is a living machine designed to harness the unfocussed dark power of the Abyss and create the most powerful legendary weapons. The Maker who built this abomination, known only as the Mad Smith, was shunned by his own people and sealed away in the Shadow Lands with his creation. However, the forge hasn’t remained dormant all those years of captivity; it has constructed a vast army and now threatens all creation.

The vast swamp-like Shadow Lands added by this DLC is a new gameplay zone with an entirely new visual look, including two challenging new dungeons, new enemies to best, secrets to uncover and unique legendary loot to collect. Tailored towards the most competent Darksiders II players, the Abyssal Forge will test your metal against the hardest enemies and puzzles yet.

The Abyssal Forge is available to download on Xbox 360 and PC worldwide as well as PS3 in North America on Tuesday Oct. 30. The European PS3 version will go live the next day on Wednesday Oct. 31. This DLC will be priced at 800 MS Points / $9.99.

Darksiders II follows the exploits of DEATH, one of the four horsemen of the Apocalypse, in an action-packed tale that runs parallel to the events in the original Darksiders game. This epic journey propels DEATH through various light and dark realms as he tries to redeem his brother WAR, the horseman blamed for prematurely starting the Apocalypse in Darksiders.

Darksiders II is available for PlayStation 3 and Xbox 360 and PC, with a WiiU version scheduled for release on Nov. 18. For more information check www.Darksiders.com .

About Darksiders II
Awakened by the End of Days, DEATH, the most feared of the legendary Four Horsemen embarks on a quest to redeem his brother’s name. Become the terrifying force which everything fears but nothing can escape.

The original Darksiders®, released in January 2010, received critical acclaim including the Best Fantasy Game 2010 award from IGN. Darksiders followed the story of WAR, wrongly accused of starting the apocalypse, on a quest to reclaim lost honor and take revenge on those who wronged him.