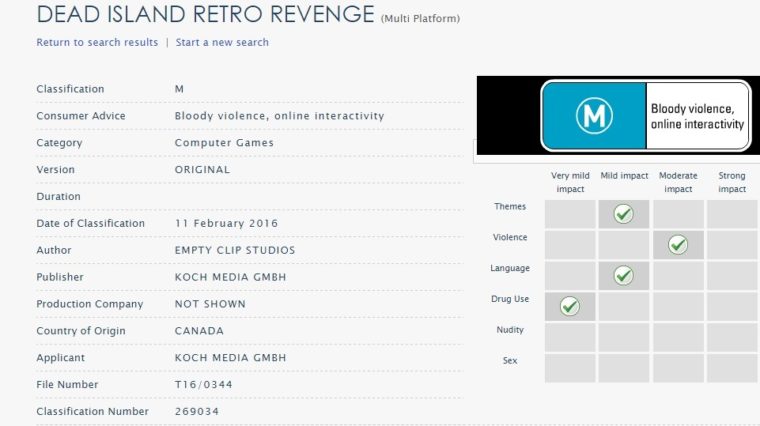 The Australian Classification Board has rated a peculiar game title named “Dead Island Retro Revenge” on its official website today. This is the first time anyone has heard of such a video game.

The listing shows that Dead Island Retro Revenge was rated on February 11th, 2016 and the country of origin is Canada. The developer for the game is Empty Clip Studios and it will be published by Koch Media over in Australia.

The game has been rated M for “Bloody violence and online interactivity”. It has mild impact themes and language. It only has a very mild impact on drug use, but there is a moderate impact of violence. The game has no references to sex or nudity.

It’s highly possible Dead Island Retro Revenge will be a mobile only video game. Developer Empty Clip Studios has made small games in the past including a title called ‘Glow’ which came out on the iPhone back in 2012.

With Dead Island 2’s status up in the air, Retro Revenge might be the only game releasing this year from the franchise. Hopefully it’s a shooter style of game that harks back to the ’80s and early ’90s.