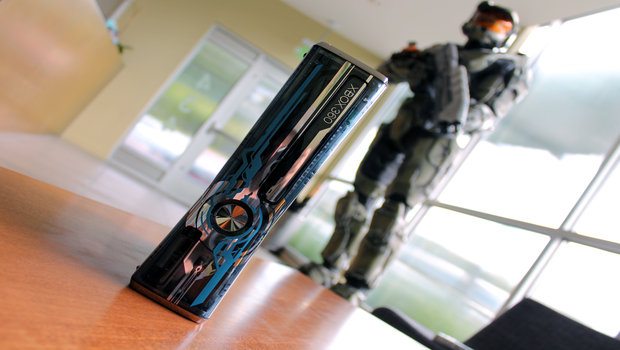 By now, you’ve seen and have perhaps closely analyzed the Halo 4 Limited Edition Xbox 360 bundle and the Halo 4 controller which will be sold separately. In your analysis, you may have concluded that 343 Industries randomly designed the Halo 4 console with light blue brush stokes colorfully added throughout simply to contrast the sleek silver design of the Halo: Reach system. Well, you’re wrong, because the Halo 4 Xbox 360 not only has a thorough context attached to it, it’s specifically designed to resemble “an important object in the game,” one of Forerunner origins and that we haven’t yet seen.

In the most recent Halo Bulletin, 343i discusses the background of the Halo 4 console and how its design came to be. The post states that the team wanted to give the system design an organic feel while still holding true to its roots of Forerunner militaristic origin:

The post then gets into some juicy, yet enigmatic details by stating that the console’s primary inspiration is taken from “an important object in the game that you haven’t seen yet.”

“The transparent case does a couple of things – the simplest of course is creating a translucent Xbox for collectors – ‘metallic’, ‘weird surfaces’, and ‘translucent’ are all popular ‘mod’ schemes for things like custom PCs and consoles, historically. Secondly (and actually more importantly), it speaks to some of the materials and objects you’re going to encounter in the game. The main inspiration comes from an important object in the game that you haven’t seen yet, and while it’s not a literal recreation of that object, having it grounded in the heart of our story was always the number one factor driving our design process – even if it had ended up as a UNSC-themed object (as did one of the controllers) that would have been a prime driver.”

Still not enough to get you to throw down $400 for a new Xbox 360? 343i has also courteously revealed the exclusive console sounds alluded to in the initial reports of the bundle. The sounds below, both in Quicktime format, certainly sound alien in nature, and without extensive knowledge or background info of the Forerunners and Forerunner environments, it’s difficult to compare them to anything.

While the mysterious object which inspired the console’s aesthetics remains in secrecy, 343i did hint that the two console sounds are modeled after “various Forerunner technologies.”

The addition of little audio DSPs lets us add elements of Forerunner flavor to the ‘activity’ buttons (power and eject), which Tajeen and the audio team culled from various Forerunner technologies in the game. They’re not verbatim recreations of specific in-game items, but rather custom-tuned elements that have a kind of crystalline-metallic quality.

If owning an Xbox 360 designed after a prominent Forerunner object that will be featured as an important device in the game’s narrative sounds intriguing to you, the Limited Edition Halo 4 Bundle (priced at $399.99) comes with a copy of the game, two custom designed controllers, a wired headset, a 320 GB hard drive, built in Wi-Fi, and exclusive Halo 4 DLC including a FOTUS armor avatar costume, in-game FOTUS Spartan armor, an avatar Promethean Crawler prop, an in-game LightRifle skin, and an in-game Unicorn emblem.

Check out some new screenshots of the Halo 4 Xbox 360 Bundle as well as the custom UNSC controller: