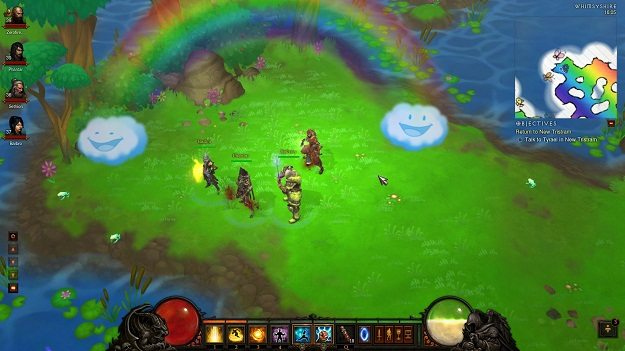 If you’ve explored all the nooks and crannies of Sanctuary and failed to come across “Whimsyshire”, you’re not looking hard enough. A secret level that draws parallels to Diablo II’s “Cow Level” has been discovered. This definitely treads into spoiler territory, so on the off-chance that you don’t want anything spoiled, you probably shouldn’t watch the video below because it describes precisely how to uncover this Easter egg.

According to the Diablo III Wiki:

“The secret level is a fully-playable area of the game. There are monsters (cute ones), gold and item drops, health orbs (which look like giant pink cupcakes), random and elite bosses, and even an amazing, baby’s-blanket looking minimap.

Though the area is accessed through Act One, the difficulty is balanced to be equivalent to late Act Four. Thus a low level character will be slaughtered instantly, even in the normal difficulty version of Whimsyshire.

The secret level is not going to be a major portion of the gameplay; it’s a fun treat and am amusement, but the developers didn’t want to recreate the Diablo II Secret Cow Level, which was literally the most profitable area to play in during some early game patches.”

How to get to Whimsyshire

To gain access to Whimsyshire requires five special ingredients, and a Plan to teach the Blacksmith how to craft them into the Staff of Herding. This object must be taken to the Cow King’s Ghost, a spectral bovine located on Old Tristram Road, near that pit with the mysterious red glow from within.

After the Cow King’s Ghost conversation, the glow changes to a rainbow color and it becomes a clickable dungeon entrance. As was the case with the Diablo II Secret Cow Level, characters must have defeated that difficulty level to enter the secret level, which is balanced to be about as difficult as Act 4.