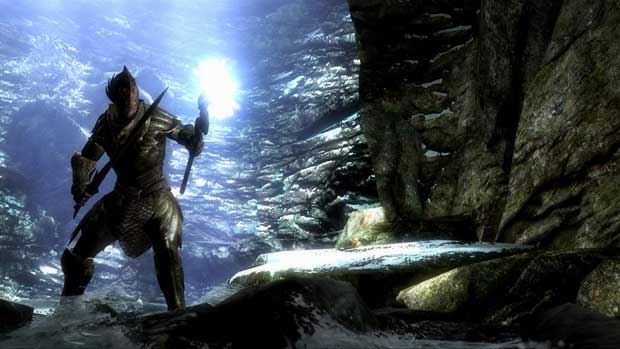 Another preview went live for The Elder Scrolls V: Skyrim. In it, Dragon Shouts, Dual Weilding, Factions, and more information about the game have been revealed. With the dragon invasion being front and center in Skyrim, and the neccessity to collect these Dragon Shouts powerups, I suppose that’s as good a place to start as any.

Questing and Dialogue
The Elder Scrolls V: Skyrim will feature over 60,000 lines of recorded dialogue, with quests randomly generated using the Radiant Story system. The developers wanted Skyrim to feel more realistic by making it less scripted and predictable.

Factions
Four factions have been confirmed, with quests included into the game’s main storyline:
The Dark Brotherhood
The Thieves Guild
The College of Winter Hold (Mages)
The Companions (Warriors)

Cities
Cities will host unique economies, where players can build up or destroy if they so desire. Guards make a return in Skyrim, but they will be a little bit easier to evade than they were in Oblivion. Players can earn have bounties placed on their heads, but they will not be carried over to other cities.

Players can ride horseback on the more realistic horses, take a carriage between towns, or use the fast-travel system that will be making its return.

The Elder Scrolls V: Skyrim will release this November, with plenty of news to come out of E3 2011.