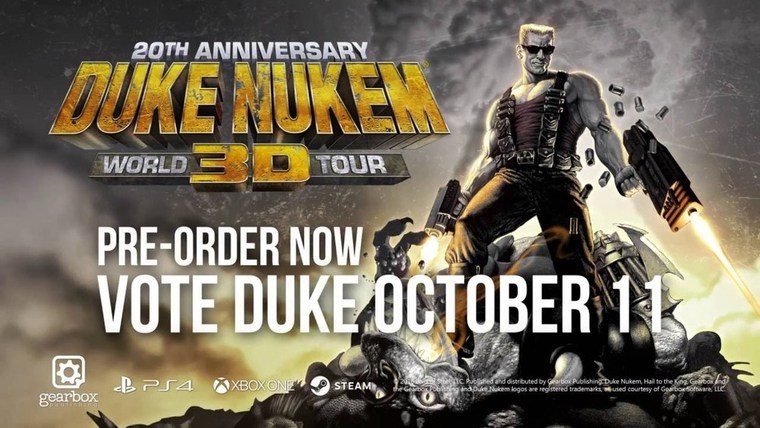 Duke Nukem 3D is easily one of the most iconic games of the mid ’90s, as it helped to push the FPS genre forward after the massive successes of games like Doom even earlier. We’ve seen a number of different releases for this game over the years and now yet another has been announced with Duke Nukem 3D 20th Anniversary World Tour.

The Duke Nukem license was basically unused for years beyond the constantly in development hell Duke Nukem Forever. However, Gearbox Software acquired the series back in 2010 and released the long gestating Forever a year later.

As a result, Gearbox Software used PAX West as a platform to announce Duke Nukem 3D 20th Anniversary World Tour that will be releasing on October 11 for PlayStation 4, Xbox One, and PC.

This game will include the original four episodes that made up Duke Nukem 3D, but now Gearbox has gotten the original episode developers back to create a fifth episode made up of 8 new levels. Making this even better, they got back the original theme song author and game composer, Lee Jackson, to score the new episode.

In addition, the game will also include new high fidelity re-recordings that are known as “Duke Talk” from the original voice actor, Jon St. John.

Look for Duke Nukem 3D 20th Anniversary Tour next month on October 11 and in the meantime, check out the announcement trailer for the game below.