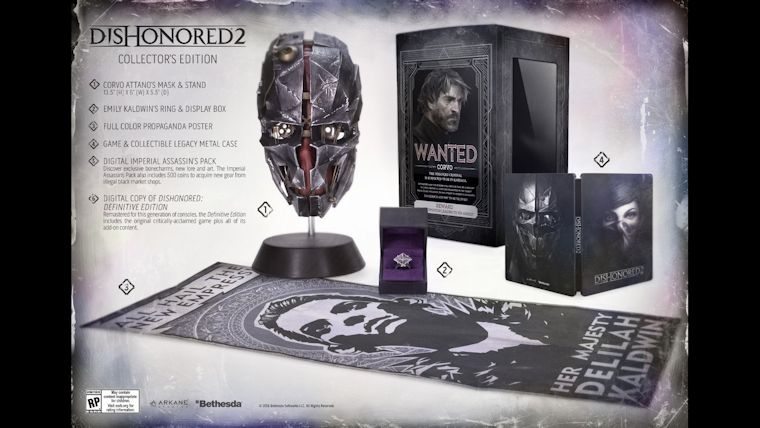 Dishonored 2 is the much awaited sequel to the almost underrated Dishonored, but it looks like the sequel is going to be bigger and better in much every way, which has us hyped for it to release. In similar fashion to how Bethesda revealed the Fallout 4 Pip-Boy Edition at the tail end of their conference last year, they have now done the exact same with Dishonored 2 Collector’s Edition that you can now pre-order.

At the time it was announced tonight, we were warned that this would be in limited quantities, similar to the Pip-Boy Edition, so we made sure to keep an eye out for when it went up and it has now gone up in two places so far.

As of the time of this writing, you can pre-order the Dishonored 2 Collector’s Edition through both the Bethesda store and Amazon for $99.99.

Thanks to Amazon, we know exactly what this collector’s edition includes now. The previously revealed replicas of Corvo’s mask and Emily’s ring with a stand and display box respectively are included, as well as a full color propaganda poster.

The game itself will come in a “Legacy” metal case that has Emily and Corvo each on one side of the cover. This will also include the Digital Imperial Assassin’s Pack which will provide you with in-game content such as new bonecharms, lore, and art. And just like we told you, this will include a free copy of Dishonored: Definitive Edition just like all pre-ordered copies of the game.