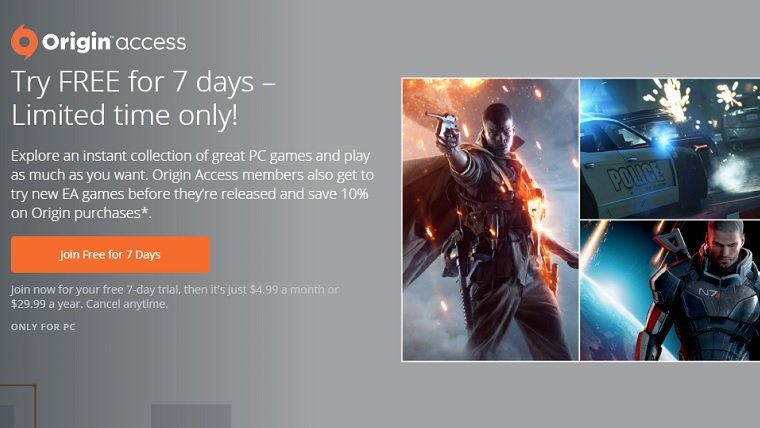 If you’ve been interested in checking out EA’s Origin Access game library service then you’re in luck, as the company has just announced that they’re currently offering a 7 day free trial for it. They did not announce how long the offer would run for, but you can sign up for it by clicking right here.

You need to sign up for either the $5 monthly subscription or the $30 yearly subscription in order to have access to the free trial, but if you cancel your subscription before the trial is up then you won’t have to pay anything. Origin Access is the PC version of Xbox One’s EA Access, which offers several games for people to check out for free. These include the likes of recent games like Plants Vs Zombies: Garden Warfare 2 and Unravel, as well as older games like the original Mass Effect and Jade Empire.

It’s also worth noting that some EA games can be played prior to launch by EA/Origin Access subscribers, with subscribers usually getting to play the game five days early. While they don’t do this all the time, one notable upcoming game that will support this promotion is the highly-anticipated Mass Effect: Andromeda. The following is a list of all the games that Origin Access subscribers have access to currently: