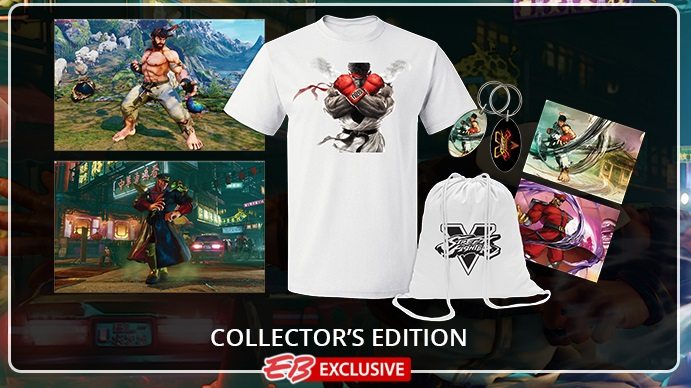 EB Games Australia has now listed an exclusive Street Fighter 5 Collector’s Edition that comes with several different things not offered in other countries. It’s worth checking out if you live in Australia.

EB Games Australia notes this as a retailer exclusive and it’s simply called a “Street Fighter 5 Collector’s Edition”. Unlike other editions, this does not come with the expensive Ryu statue. This edition is somewhat more affordable costing $AUD129.95.

This edition comes with: “PS4 Game, T-Shirt, Bag, Ryu Dog Tag Keyring, 2 Character Postcards and 2 DLC’s – Ryu & M. Bison costumes“. It looks like only Australia’s branch of EB Games has this at the moment. No other EB Games in other countries have it. It’s worth mentioning this is just a PS4 exclusive as it’s not listed for PC.

The New Zealand EB Games does not have this collector’s edition list yet which is weird. This is because Australian and New Zealand markets are usually treated as the same. It’s possible that it might be listed soon, although we’ll just have to wait and see.

Street Fighter 5 is the newest iteration of the long running series. It will be released on February 16th, 2016 for the PS4 and PC. It won’t be released for the Xbox One as it will stay exclusive to those platforms only.