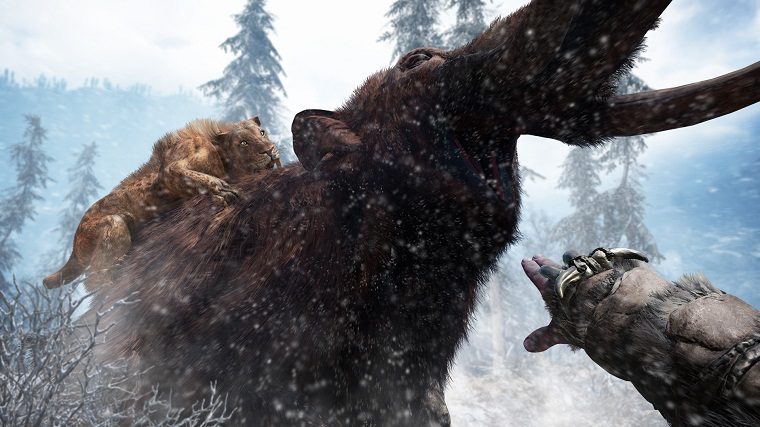 The ESRB has now rated Far Cry Primal giving us a few new bits of information on the game’s content.

Far Cry Primal has been rated as M for mature players over the age of 17. The content descriptors are: Blood and Gore, Intense Violence, Nudity, Sexual Content.

The rating summary shares even more info: This is an action game in which players assume the role of Takkar, a nomadic hunter trying to reestablish his tribe. From a first-person perspective, players engage in missions that involve tracking/hunting animals, resource-gathering, and combat against rival tribes. Players use arrows, spears, and clubs to kill enemies in frenetic combat. Some sequences require stealth kills in which enemies are stabbed in the head or slashed close-up.

One cutscene depicts a character being held in a fire while screaming; another depicts Takkar tapping a hole in another character’s skull as the man screams. Some scenes depict corpses in various states of mutilation: heads and torsos on spikes; ears cut off and kept as trophies; headless bodies lying in pools of blood. Certain scenes or camera angles can depict male genitalia under garments or in shadows; some female characters are depicted topless. A handful of scenes depict characters engaged in sexual activity while clothed; grunts and short moans can be heard, though no explicit details are seen.