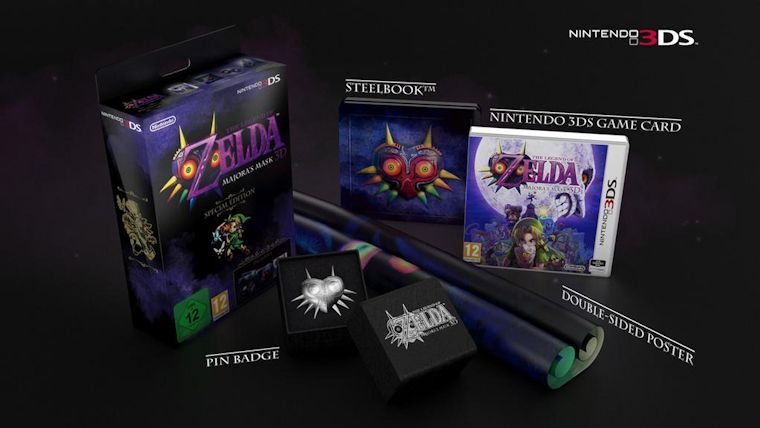 The much speculated about The Legend of Zelda: Majora’s Mask 3D was finally revealed during yesterday’s brand new Nintendo Direct to the excitement of fans. The US feed for the Direct featured the trailer and talk about the game by Satoru Iwata, but the European feed also unveiled something that will make other regions extremely jealous.

In addition to the regular version of The Legend of Zelda: Majora’s Mask 3D, Europe will also be getting a Special Edition that is absolutely gorgeous. Not only will gamers get the regular game cartridge, but also a steelbook, pin badge, and a double-sided poster. As seen above, the steelbook and pin use the always awesome Majora’s Mask design.

It is very disappointing that this collection appears to be a European exclusive, as there are many fans that would easily shell out the money for something such as this. Hopefully Nintendo of America changes their mind between now and then and offers something similar. It just doesn’t need be like we saw with the Hyrule Warriors Special Edition that was a Nintendo World Store exclusive at the midnight launch.

The Legend of Zelda: Majora’s Mask 3D will be making its way to the Nintendo 3DS sometime in Spring 2015.