The Evil Within 2, Wolfenstein 2, and Dishonored 2 DLC Getting Prequel Comics 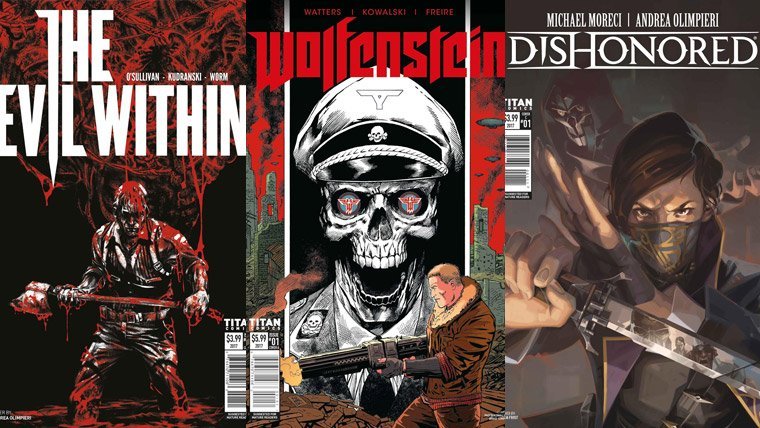 Bethesda has signed a deal with Titan Comics that will allow the release of a series of comic books expanding the universe of the new titles presented by the company in the last E3. The comics will serve as prequels to The Evil Within 2, Wolfenstein 2: The New Colossus, and the Death of the Outsider DLC of Dishonored 2. The three of them will release in September.

The comic book based on The Evil Within is being created by Ryan O’ Sullivan (Warhammer 40,000: Dawn of War III), Damien Worm (The October Faction) and Szymon Kudranski (Spider-Man), and it will be released on September 6th. The prequel of Wolfenstein 2 is being written by Dan Watters (Limbo, Assassin’s Creed: Uprising), and illustrated by Piotr Kowalski (SEX, Dark Souls) and Ronilson Freire (The Mummy) and will launch on September 13th.

Finally, Dishonored: The Peeress and the Price, which is a prequel to the upcoming Death of the Outsider DLC, is written by Michael Moreci (Roche Limit) and illustrated by Andrea Olimpieri (Dishonored) and Mattia Iacono (Demone Dentro). This will be the last comic to arrive to stores, launching on September 27th.

Dishonored 2 The Evil Within 2 Wolfenstein 2: The New Colossus
We're Looking For Contributors

Home / Game News / The Evil Within 2, Wolfenstein 2, and Dishonored 2 DLC Getting Prequel Comics