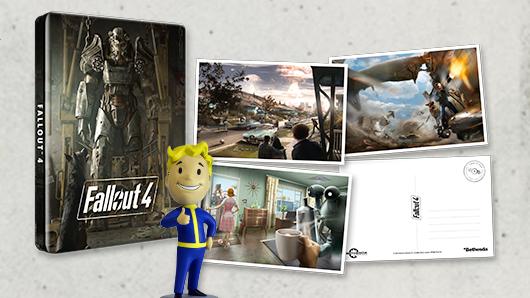 Exclusive to GAME retailers in the UK, there will be a special edition Fallout 4 with a steelbook and a couple of postcards.

The announcement was made via a press release from GAME plus a listing on its official website. The retailer notes that it is the only retailer offering these exclusive items. If you live in the UK, this is a great deal.

If you pre-order Fallout 4 from GAME, you will get the UK exclusive steelbook case and a postcard pack. The postcard pack will include artwork from the new game.

It will be available for the PC, PS4 and Xbox One. This ensures every gamer has a chance to secure this special edition. It’s not much tied to only one platform or anything like that.

This version of the game is easier to get than the elusive Pip-Boy Edition. That version is still sold out at GAME like in many other retailers. You can be sure a lot of people will be selling them off on eBay once the game launches his November 10th. It will be cheaper just to get the steelbook edition.