Fallout 4 VR Will Be Groundbreaking According to AMD

The latest news in the world of video games at Attack of the Fanboy
April 12th, 2017 by Al McCarthy 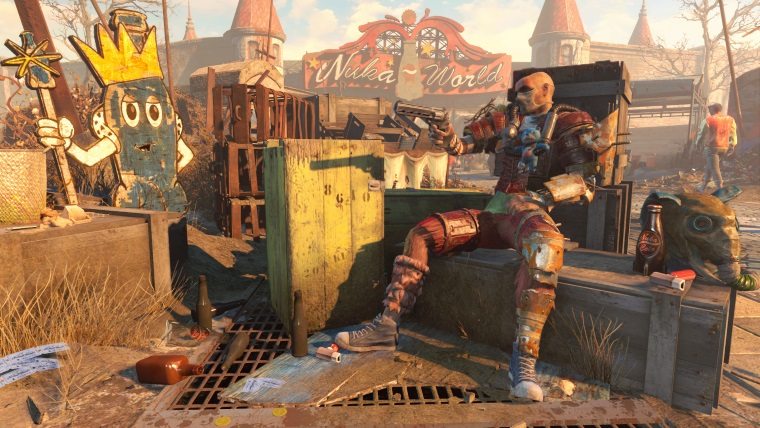 Bethesda certainly has high hopes about their upcoming re-reveal of Fallout 4 in VR.  After a showing of an early version of the game at last year’s E3, a year of work has them touting this as a headliner title for the publisher.  Recently, Bethesda’s Pete Hines described the experience as “the craziest thing you’ve ever seen.”

Now we’ve got even more hyperbole ahead of E3, and this time out of AMD’s Corporate Vice President, Roy Taylor.  Taylor believes that Fallout 4 VR will change the way we think about virtual reality and says that it could be the Mario and Sonic for this segment of the video games industry.  Taylor believes that Fallout 4 will be an “industry changer.”

The first year of VR in the mass market hasn’t exactly been the huge success that everyone had hoped.  While PlayStation VR brought the technology to the 10’s of millions of PS4 owners, Oculus and Vive still have large price hurdles to enter the hobby.

Will Fallout 4 VR be the thing that urges even more gamers into virtual reality?  If it’s as crazy as Hines says it very well could be.   However, it’ll have had to make a quantum leap from what it played like at last year’s show.

Our very own Kyle Hanson got a chance to try Fallout 4 in VR last year, and while walking away calling it immersive and fun, he said it wasn’t the best way to play Fallout 4.  A year of development could very well have shifted this opinion.  After all it was last June that we got to try out Fallout 4 in VR.  Using room scale technology, the demo that we played allowed you roam freely within a small area, but outside of that you needed to teleport around the map, which in turn, breaks some of the immersion.

E3 2017 is just around the corner, we’ll see what convention goers have to say about the Fallout 4 VR and its progress then.