The latest news in the world of video games at Attack of the Fanboy
October 5th, 2014 by Danny Vittore 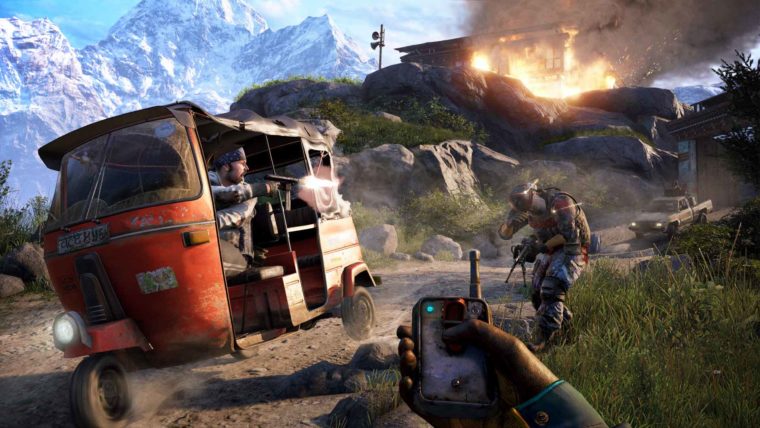 Far Cry 4 is more than a month away from being released, but Ubisoft isn’t letting up on teasing the limited edition, which is available for pre-order. Below you will find a trailer called “Hurk is back!” It may look innocuous enough, “cool, more content to look at after the weapons showcase from last time.” However, as you watch it, you will realize that this is content that you will get to play only if you get the Limited Edition or if you buy a DLC pack (that I would be very confident of seeing) containing it.

That said, found in the bonus content is some interesting looking stuff. Most noticeable is a character who should be recognizable to those of you who played the Monkey Business DLC for Far Cry 3 where you helped him strap bombs to monkeys. That’s right, as the trailer’s name suggests, Hurk is indeed back and he brings with him three bonus “story” missions, more monkeys and a ginormous harpoon gun.

The harpoon gun looks like it can make the bonus content worth it (assuming you aren’t limited to using it within the bonus missions themselves) as the way it works is not too dissimilar to the famous “penetrator” nail gun in FEAR. Not only do your enemies (people and animals) comically fly backwards, but if they hit a wall, they will be nailed to it by your enormous harpoon. There’s just something about ragdoll physics that makes it all entertainment in and of itself.

Are you looking forward to harpooning yourself a bit of DLC? Let us know in the comments below!