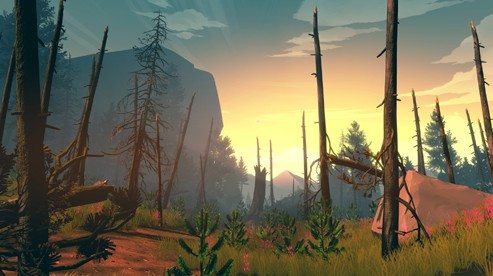 Campo Santo’s comedic first-person exploration game, Firewatch, has been revealed by the studio to be releasing on February 9th, 2016 on PS4, PC, and Linux.

“We’re aiming for a world-wide release (as world-wide as our small studio can pull off) and will have more information in the lead-up to the date. If you’re in San Francisco, another opportunity for you to get your hands on the game (running on PS4 hardware!).” The studio said in its statement about the launch.

Firewatch begins in 1989 in Wyoming out in the wilderness, with the character of Henry, a fire lookout who becomes embroiled in a mystery of strange events. Henry is able to communicate with Delilah his supervisor, often leading to hilarious moments between the two. Exploration and freedom is key to the game, and Henry is given a multitude of dialogue options when making decisions throughout that will determine is relationship with the character.

I first checked out the game at PAX Prime 2014, and was impressed by all the work that was put in by such a small development team, and the relationship between Henry and Delilah felt genuine thanks to the well crafted script. If you own a PC or PS4, there is no reason not to check out this game.