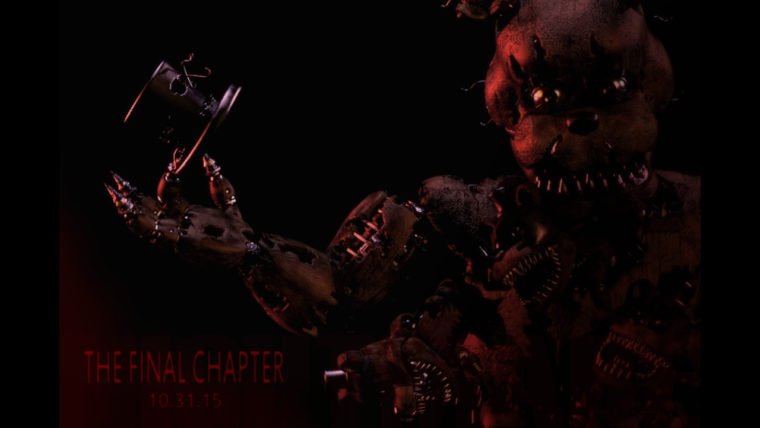 Five Nights at Freddy’s 4 has been scaring gamers for a few weeks now, so series creator Scott Cawthon has taken some time to talk to fans about the October 31st update. We just get the general idea of what will be included, but some of the other stuff that Cawthon says will be interesting for series fans.

“The October 31st content will be an automatic update, not DLC,” says the Steam post from Cawthon. “It will update the game to 1.1 and will include lots of goodies on the extras menu (for those who have beaten night 6), including a cheat menu, a challenge menu, and a twist on a familiar minigame that provides a boost when playing challenge modes. This also means that there will be a whole new set of stars to earn for those who are up to the challenge! ”

He also discussed his new game, which will apparently not be Five Nights at Freddy’s 5. It seems like it will be a new IP entirely, though with Cawthon you never know. Perhaps he’s got a surprise planned for fans, or he’s just working on something brand new.

In regards to the story of Five Nights at Freddy’s 4, it seems that fans have disappointed Cawthon this time around. “You know, when I released the first game over a year ago, I was amazed at how quickly everyone found every bit of lore and story” explains Cawthon. “Then the same happened with part 2, fans and youtubers dug in and found everything. Game Theory did an incredible video on part 2; getting almost everything right. Then part 3 came out, and once again the story was uncovered by the community. It seemed that there was nothing I could hide!

“But then I released part 4, and somehow…. no one, not a single person, found the pieces. The story remains completely hidden. I guess most people assumed that I filled the game with random easter eggs this time. I didn’t. What’s in the box? It’s the pieces put together. But the bigger question is- would the community accept it that way? The fact that the pieces have remained elusive this time strikes me as incredible, and special, a fitting conclusion in some ways, and because of that, I’ve decided that maybe some things are best left forgotten, forever.”

Five Nights at Freddy’s 4 is available now on PC.