The latest news in the world of video games at Attack of the Fanboy
December 14th, 2015 by Kyle Hanson The Five Nights at Freddy’s series is known for its jump scares and its creepy atmosphere, but behind it all has been a deep and rich lore that fans have been forced to piece together via the most bare bones of narrative threads. Each new game has added something to the mix, with fans poring over every tiny detail, trying to figure out just what the hell is going on behind the scenes. Now that hunt might finally be over (probably not), with the impending release of Five Nights at Freddy’s: The Untold Story. 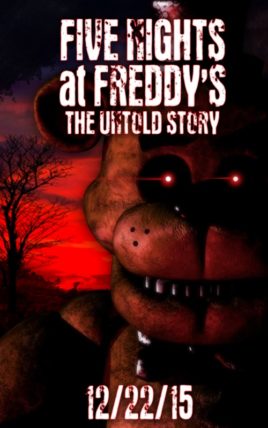 Thanks to a new teaser on FNAF developer Scott Cawthon’s website we now have the official release date for The Untold Stories. December 22nd, 2015 is the day that fans will finally learn all the secrets of the series. Of course, given the history of Five Nights at Freddy’s, it’s most likely that none of that is true at all.

The series is well known for jumping the gun on its release dates, so you can expect the book to arrive any time between now and then. Also, it is highly unlikely that Cawthon has actually laid bare the narrative behind his games, instead opting to include a lot of information, but still extend the mystery that fans have invested so much time and energy into.

As is usual with these teaser images, there was still more info to be found, hidden on the website. It appears that Five Nights at Freddy’s: The Untold Story will be released as an ebook, specifically saying “coming soon to Amazon Kindle, very soon”. Fans of the series should keep an eye on Amazon, and check back here for updates in case it releases earlier than expected.

Five Nights at Freddy’s 1, 2, 3, and 4 are available now on PC with an RPG title, FNAF World to follow later on.