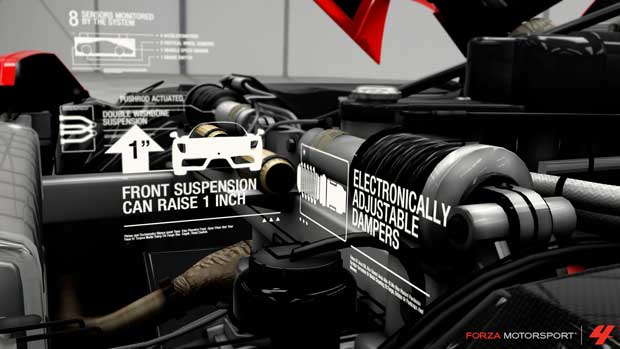 This fall, Forza 4 will return to the track on the Xbox 360.  This time around, the fabled racing franchise brings a slew of new options to the game, as well as pushing the limit of what to expect from both the graphics and gameplay of the simulation style driving game.  Turn 10 had plenty to be proud of at E3 2011, aside from their showing on the floor of the convention, which showcased how Forza 4 will look and feel come October, they also unveiled the insane amount of features that the game will ship with.

Turn 10 revealed most of the features of Forza 4 behind closed doors at the convention.

Kinect will play a large new role in Forza 4.  Thankfully, Turn 10 didn’t go all-in with the Kinect functionality and kept most of features as optional enhancements to the Forza 4 experience.  In Autovista mode, players with a Kinect motion controller will be able to do virtual walk-arounds of cars.  If you’re into car pron, you’ll love Autovista with the Kinect.  You can open the doors to the vehicles, examine the engine, the interior, and more.

You’ll also have plenty of Kinect functionality in the menu system of Forza 4 as well.  The game recognizes specific voice commands for menu items that can instantly take you to specific portions of the game.

The Kinect functionalities aren’t just limited to out of race experiences.  The best use of the camera is probably in race, where you’ll have the option use head tracking.  This feature gives you the ability to look to the peripherals, around corners, in a subtle fashion.  The head tracking adds a level of immersion that just can’t be found in previous versions.  Using the Kinect, you’ll also be able to drive without the controller at all.  Using just your hands, you can mimic the actions you would use on a real steering wheel to navigate the twists and turns of the road, with acceleration being automatic, and braking being recognized by foot gestures.

Career Mode in Forza 4 had underwent some changes.  The new World Tour mode has moved away from the calendar style racing events, in Forza 3.  This time around your racing career will take you around the world.  How it was explained, was that each players preferences figure into how a specific campaign will play out.  Depending on the cars you choose to drive, and how you perform, the game will tweak the difficulty to match a players performance.

Across all modes, there are just more types of events to compete in.  Turn 10 is looking to keep the racing experience fresh in Forza 4, so they’ve added new types of races, as well as alternating track conditions when playing in a multi-heat event.

Car Club is a new feature in Forza 4, that looks very similar to a clan functionality found in other multiplayer experiences.  Not very much detail was given about the Car Club, but it’s a social network where you can share cars with members of your club, allowing you to progress without actually owning a specific vehicle.

How many cars are in Forza 4? This wasn’t completely revealed.  But the developer noted that there are over 80 manufacturers featured in the game.  Touted as “the most in any racing game available today”.  We only saw a small portion of the available vehicles, but Forza 4 is definitely going to have a diverse group of vehicles to buy, earn, share, and customize.  The game features what is called “the most accurate physics engine”, which offers realistic damage modeling for each vehicle.  Also noted was the fact that each vehicle had a realistically recreated cockpit view as well.

While the new features of the game weren’t prominently on display at the Microsoft Booth at E3 2011, there was plenty to get excited about from the graphics and gameplay perspective.  Forza Motorsport 3 took a huge leap away from the Forza 2 in the graphics department, especially in the presentation of the game.  This is once again, front and center for the developer.  Equally impressive was the sheer detail that was put into the car models of the game.  Putting it all together visually, Forza Motorsport 4 is an impressive package.  Photo-realistic tracks, set across real-world locales, with the equally impressive car models makes for an impressive package.

After taking the time to tinker with the options of the demo, I had the ability to check out how well the game handles on multiple difficulty settings.  Forza 4 can be as casual an experience as you make it, or as realistic a simulation racer as you wish.  The level of customization encompasses all walks of gamers, you can turn on realistic damage settings, racing lines, braking assists, and many other options to customize your Forza experience.

With so many features outside of the racing, and the racing being so refined, Forza 4 looks like it could be the most complete simulation racing package in years.