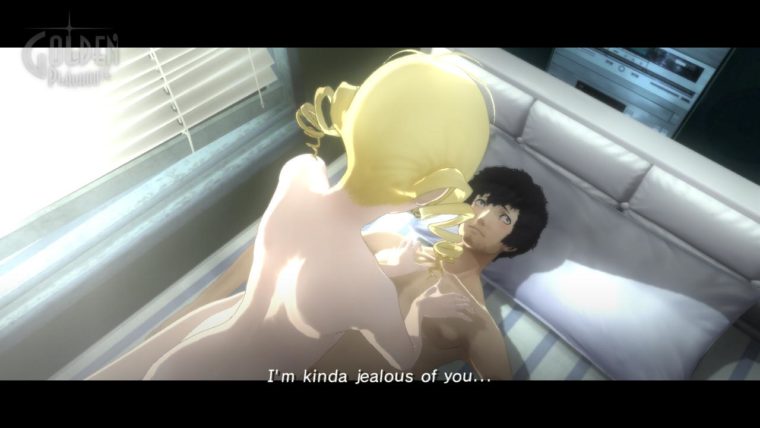 Catherine is apparently very dirty –  This action adventure game looks fun.  Like maybe one of the adventures is to jump down the middle of a woman’s breasts like a god damn slip ‘n slide. Look at that guy, he looks like he’s having the time of his life.  I might like this game, it will be just like college, hoorah.  I don’t know much about Catherine because only pedophiles and degenerates know about this stuff, but according to the box art, that’s exactly what I’m gonna get to do. BTW when does this go on sale again?[Scrawl]

Sony Bravia Includes Built in PS2 – Great just what we needed. The next generation of those stupid TV/VCR combos that only came out once VCR’s were useless. I think I’ll pass.

The Ultimate Burn to CoD Players – The stock price for the makers of Depends is positively correlated with the release of Call of Doodie Black Plops.  Amazon is saying that Adult Diapers are frequently being bought with the Call of Duty video games.  This obviously means one thing, people love to shit themselves and play Call of Duty…case closed.  I can’t say that I’ve ever done it, but I can’t lie and say I haven’t thought about it either. -[Gamesradar]

New Assasssin’s Creed Features Already About – For the love of Jesus and all that is holy, let’s let people have a chance to finish this Assassin’s Creed game before we start talking about Assassin’s Creed 3,4,5.  We got it, it makes money, we know, we gave it to you. [Eurogamer]

Gran Turismo 5 Wreck is a Fail – What the fuck do you expect to happen when you drive headlong into traffic on a Nascar circuit?  Good Things.  Nah.  This video shows why this should never be your goal, unless your into insane barrel roll crashes. [Destructoid]

Civilization V Nominated For A Grammy – That’s nice because it sure as hell isn’t getting nominated for anything to do with gaming.

PSN Plus is a huge success – I’m all for capitalism but the day I’m asked to pay for PSN is the day I trade in my PS3, I’m just saying.

NSFW Naked Pictures of Video Game Girls in Splatterhouse – I almost added this to my Sexiest Moments of 2010 because of the sheer brilliance in adding nudie pictures to the piss poor game, Splatterhouse.  I didn’t but thank god these guys picked up the slack.