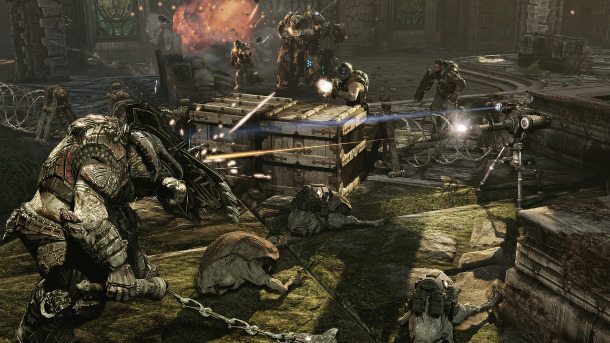 The Gears of War franchise has made a lot of things popular this generation.  Cover shooters, Horde Mode knock-offs, and with the new Beast Mode incorporated in  Gears of War 3, you’ll likely have another feature to add to that list of things that other developers attempt to emulate.  Epic hasn’t held back anything from the fans leading up to the release of Gears of War 3, which is only a two months away.  We’ve seen a fully playable multiplayer beta that impressed many who came into contact with it.  The campaign, from what has been seen, looks like the developer’s best work yet.  Though Epic isn’t resting on their laurels.  They do have one more trick up their sleeve this time around, and that’s the Beast Mode.

In Beast Mode, the game allows you to take on the role of the Locusts, and guess what your goal is?  Yep, take down Marcus and his buddies.  It’s a Yin to Horde Mode’s Yang.  In Horde Mode, the game is all about survival.  You prepare yourself to hold out for as long as possible while defending yourself from wave after wave of enemy.  In Beast mode, your objective will be to take down the Delta Squad in the fastest time possible.  You can team up with up to five players to complete your objectives, and you’ll be controlling any number of Locust characters which vary in specific strengths.

As these things go, you’ll be starting out with the lower classes of locusts, battling against a fairly easy group of humans.  You know what your job is as a locust, it’s to defeat the enemies in as little time as possible.  And the humans won’t just be standing around waiting for you to come chainsaw them in half.  They’ll be placing traps around the map, setting up barricades, auto turrets, all of the tools at your disposal in Gears of War 3‘s horde mode 2.0 which you play from the perspective as the humans.  When the game begins you’ll start with a timer ticking down.  As you kill enemies or disable their devices throughout the map, you gain extra time to continue with your objective.  Continually padding your countdown timer will be a key to success in Beast Mode, but so will the money you earn from getting each kill or performing other actions like healing or destroying enemy constructs.

You’ll need this cash to purchase characters, or purchase a respawn if you die.  As you continually advance into harder waves of Delta Squad members, you’ll soon realize that the lowly efforts of a ticker just aren’t getting the job done.  You’ll need to upgrade to a higher tier of locust.  You’ll use the cash that you earn to unlock these new tiers and as you continue up the ladder of the locust hierarchy you’ll finally end up with biggest and baddest locusts of them all.

Below are some of the beasts you’ll be encountering in Gears of War 3’s Beast Mode.  As if you needed another reason to pick up Gears of War 3 this September you just got about 15 of them.  Gears of War launches exclusively for the Xbox 360 on September 20th.