The latest news in the world of video games at Attack of the Fanboy
December 23rd, 2017 by Jelani James 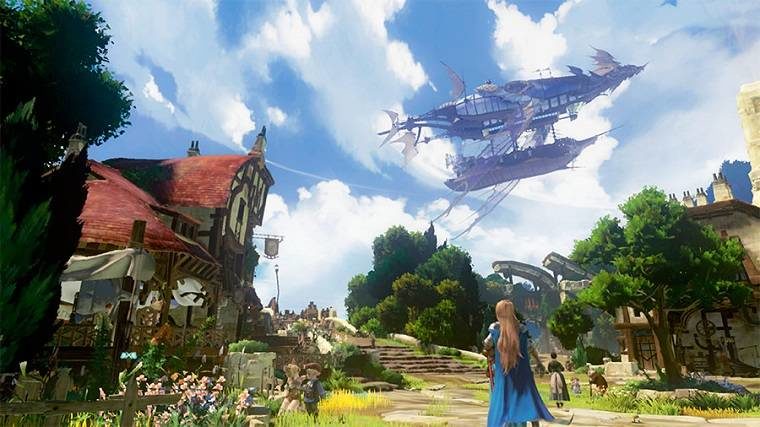 It has been quite some time since we saw anything related to this game. The first time Granblue Fantasy Project Re: Link was unveiled to the public was at the Cygames Next 2016 event in Tokyo when fans got to see a short announcement trailer showing off a few characters and gameplay. Since then, the only update Cygames has offered was a trailer showing off a boss fight against Bahamut at the 2016 PlayStation Press Conference in Japan and a series of pictures unveiled as part of Granblue Fantasy’s anniversary event.

The trailer begins with Katalina wandering in a typical town and it’s hard not to immediately notice the amount of detail placed into it. The architecture looks exactly like it does in the source material and the town itself looks alive, with various NPCs interacting with one another and even acknowledging Katalina’s presence when she walks by. As an added bonus, we even get to see the massive Grancypher (the ship the crew uses to travel around from island to island) in the background.

After that section was complete, the trailer then pans to an elongated battle sequence where Katalina is joined by Rackam, Percival and Io, to fight off a group of enemies and later a boss. The hosts didn’t go into specifics, but based on what was shown, its easy to tell that this will be a party-based action RPG — a genre that very much plays to Platinum Games’ strengths.

Thus far, the gameplay looks solid and there are many facets in place that makes it have its own distinct feel. For example, the consumable items from the source material are available for use in battle and there are even Charge Attacks and Chained Bursts when multiple characters unleash their Charge Attack at once. Furthermore, it looks like a character’s element will be taken into account while fighting enemies, as Katalina, who is a water element character, was able to freeze enemies in place with some of her attacks.

Seeing this gameplay was well worth the wait and there’s no doubt that fans will definitely be looking forward to more information about Granblue Fantasy Project Re: Link in coming months (perhaps during the 2017 anniversary event); and one of the top things on their list will be the other characters who join your party. Granblue Fantasy features an ever-growing cast of characters and many of them are insanely popular. Back in March we were led to believe that some of these characters would be getting in, but a recent update on Project Re: Link’s website has put that into doubt somewhat. The past two trailers are gone and the only character among the four who were revealed back then who remains present is Percival (amusingly, there are also pictures of Ferry there too).

Of course, things change during the course of development, but don’t take their sudden absence as evidence that they’ll no longer be in the game — especially Lancelot. And, naturally, other fan favorites such as Vira and Narmaya seem like shoo-ins as well.

Granblue Fantasy Project Re: Link is slated to release on the PlayStation 4 in Japan in 2018.

Check out the gameplay video below: