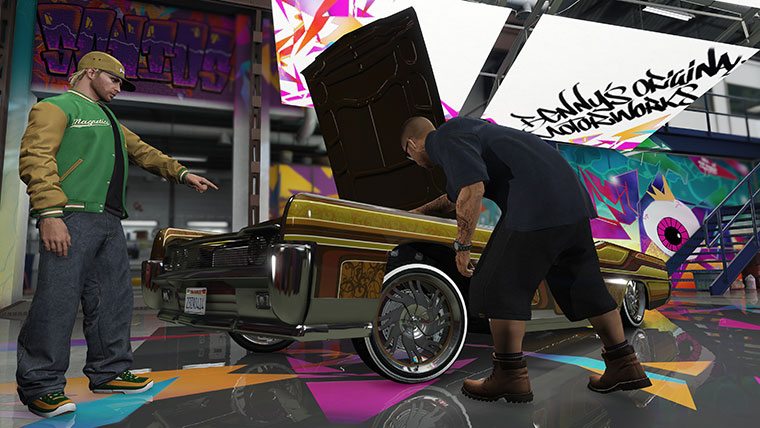 Once the DLC goes live, players will be able to use the in-game phone to choose from a number of customizable vehicles, which can then be brought down to Benny for an upgrade that unlocks lowrider mods for these select vehicles.  A number of different customizations were outlined by Rockstar, which include custom engine blocks, custom interiors, new steering wheels and shift levers.  These custom cars can also be outfitted with lift hydraulics that can bounce higher depending on how powerful they are.  Cars can also be upgraded with increase stereo performance, allowing players to add new speakers and subwoofers.

Other features will be added to GTA Online with this update.  New missions from Lamar are inbound, new weapons like the automatic Machine Pistol and Machete will be available at Ammunation.  Garage space can now be expanded and GTA Online players will now be able to purchase a fourth piece of property.

Grand Theft Auto Online’s Lowriders DLC will hit the PlayStation 4, Xbox One, and PC as an automatic update to the game on October 20th.