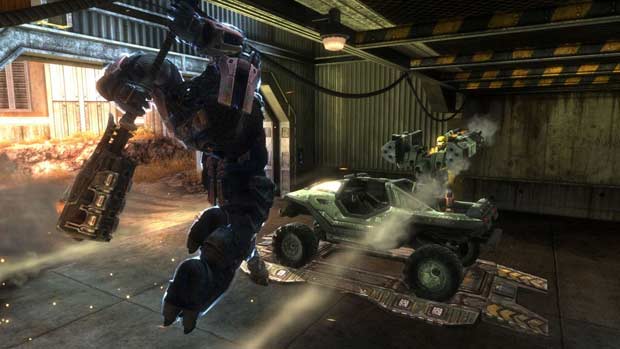 This week on the Bungie weekly update, the developers explained in greater detail Customizations, Credits, Rank, and Commendations, among other things in Halo Reach.  The developers lumped all these things into what we heard a little about earlier in the week with Player Investment.  Bungie has stated that Player Investment is their attempt at rewarding all types of Halo players, for many different play styles.

Quite different from Halo 3, the traditional ranking system is gone.  Well not gone, but changed, drastically.  Trueskill and EXP have parted and what has taken it’s place is the new ranking system that will be provided by The Arena.  The way that Halo will reward players is now quite different in the respect that you will now earn credits for things that you accomplish in the game.  Whether that be in the game’s multiplayer aspects or single player aspects you will be earning credits all along the way.

One method discussed for earning credits and regarded by Bungie as the most “significant”, is finishing games and winning games in Matchmaking.  Commendations are mini achievements that will net you credits for completing certain objectives within the rule structure set forth.  A byproduct of commendations is said to be a scouting report of sorts, where it’s clearly visible if this player is a sniper extraordinaire, or sticky grenade master.  Some commendations, while limited, will be included in the upcoming beta of the game.

Since Rank and Commendations have alot to do with Reach’s Player Investment System these things will not come into play when looking to match you up in matchmaking.  Bungie stated that Trueskill is now “the quiet machine humming under matchmaking’s hood, churning to find you the most competitive match possible.“ Furthermore, these credits will give the players access unlockables which you can use to stylize your Spartan.  These customizations are purely cosmetic and won’t affect gameplay at all.

Bungie also explained the rationale behind removing the trueskill ranking system.  And put simply, they explained that most people that played Halo 3 didn’t get the opportunity to explore that part of the game to it’s extent.

The weekly update covered a ton more, and the full Q/A can be viewed HERE.