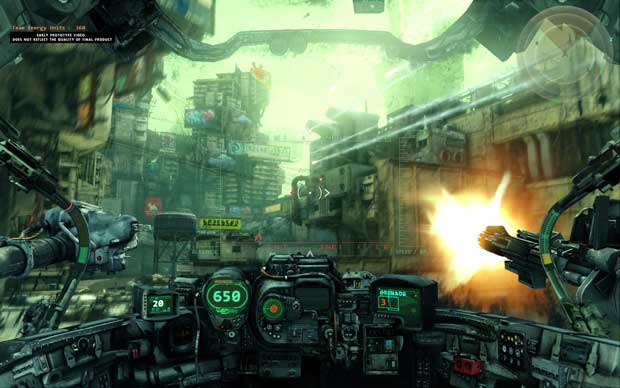 Hawken is a new mech combat first person shooter under developement by a small indie team over the course of nine months if the video below is to believed.  Considering that this game looks nothing like a small indie game that was developed by nine people, and more like a AAA blockbuster that was produced by a 90 man team, I think it’s safe to say that something very special is coming from the team working on Hawken.

We missed it when it came out last week on our server switch but just couldn’t pass on the opportunity to post it up in-case you missed it.  Have a look at the video below, a try to keep reminding yourself that this is being produced by a nine person independent studio based in L.A., Adhesive Games.  It’s mind-blowing really.

Jon Kreuzer of Adhesive Games spoke with PC Gamer about how they managed to make something that looks this well in nine months and Kreuzer had this to say:

“It was nine months, but actually less than nine people for most of that time. Our studio is now up to nine people including interns. We have some talented artists and have stayed focused on our core game. Many parts of the levels are created by combining re-usable building blocks into unique structures, which can allow new levels to come together quickly. We don’t have the resources to develop an engine from scratch so we started with UDK [Unreal Development Kit] which turned out to be an excellent choice.”

As far as where and when this will release, “At this point we really have no idea. Ideally we would like to release at some point on all three platforms. We haven’t really started on the business side of things yet.”

For more information about the game head on over to HawkenGame.