The latest news in the world of video games at Attack of the Fanboy
January 8th, 2018 by Kyle Hanson 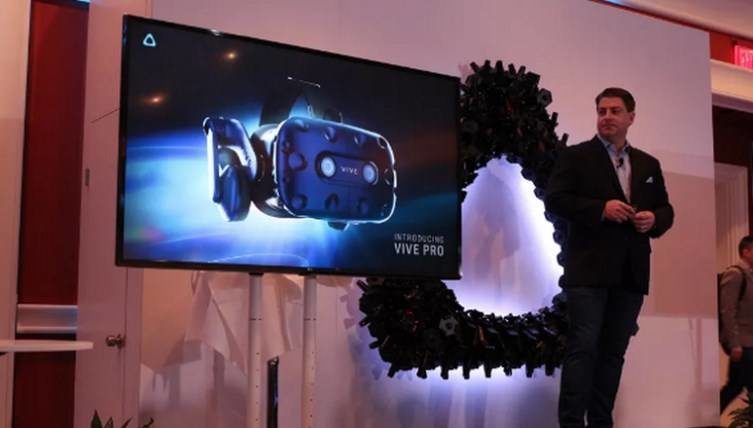 HTC teased higher resolution screens for their popular HTC Vive VR gaming platform and they seem to have delivered with their latest announcement: the HTC Vive Pro. This new headset will feature two 2880×1600 OLED displays raising the sharpness of the screen by 78% compared to the currently available Vive headset. The new Vive Pro will be available in the first quarter of 2018 to existing Vive owners, with developer units heading out some time later. Unfortunately, there’s not a lot of other information available just yet.

Price, for example, has yet to be announced. Presumably this is because HTC is still figuring that part out. If this headset is presented as an upgrade to current owners, then it’s likely that there will be a few options. I, for example, would just want to buy the headset itself. I have controllers, the deluxe audio strap, and the lighthouse sensors necessary to use the Vive Pro, so buying a bundle wouldn’t work well for me. Hopefully this means a lower price point, more in-line with an updated headset instead of a total reworking.

We do know that the new headset will have dual microphones, helping with noise cancellation when chatting online. Other than that this seems like a Vive 1.5 sort of deal, enhancing what’s available without forcing players to switch to the new platform.

Along with the Vive Pro, HTC showed off their own wireless adapter technology. VR fans have been clamoring for a way to cut the cables that tether them to the PC. The Vive focuses on room scale, so moving around is key to the experience, and a big cable hurts the immersion that was so delicately crafted by the game. The wireless adapter will be available this summer.

Watch for more info on the Vive Pro to be released soon as HTC looks to expand their hold on the VR market.