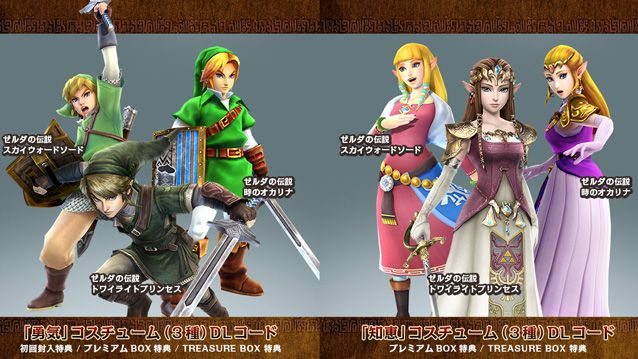 Nintendo chose to hold their Hyrule Warriors focused Nintendo Direct tonight only 10 days prior to the release of the final game in Japan. Within that Direct came plenty of new information about the game, such as the addition of Ganondorf, but perhaps one piece of information that was more interesting than the rest involves the retailers that will be selling the game and pre-orders.

For the first time in history, a Nintendo title will have retailer exclusive pre-order downloadable content with Hyrule Warriors. We’ve seen this in the past with just about every other major publisher offering special DLC based on if you pre-ordered from places like Best Buy, Gamestop, or Amazon. Now, Nintendo has decided to jump in the foray with three retailer-exclusive DLC packs based on Ocarina of Time, Twilight Princess, and Skyward Sword. However, the specific retailers were not revealed at this time, so they will likely be announced in the coming weeks with a release in the US coming on September 26.

We already knew these DLC packs were coming, at least in Japan, but this is the first confirmation of their release in the US. This certainly changes the game for Nintendo, as they appear to be finally trying new things that other companies have been doing for years now. While it would be quite a far leap from this, hopefully we will continue to see growth on their part to include something like tying games to accounts rather than consoles.