The latest news in the world of video games at Attack of the Fanboy
January 16th, 2015 by Dean James 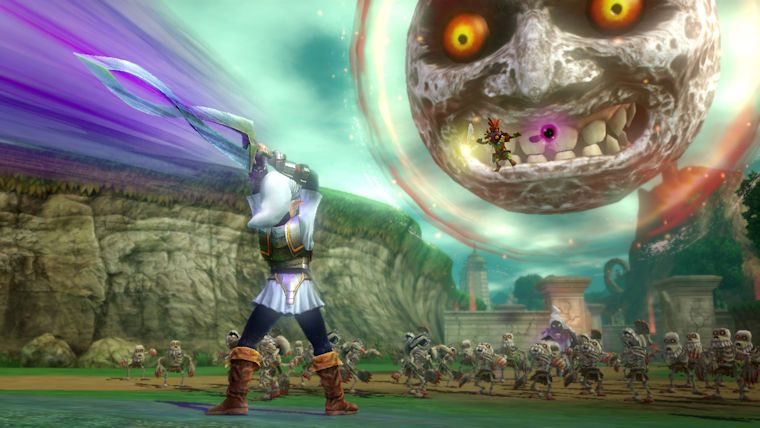 Hyrule Warriors launched last August for the Wii U as a combination of the Dynasty Warriors series’ gameplay and the world of The Legend of Zelda that we love. Since then, the game has received a slate of quality DLC, including some based on Twilight Princess. While we are all aboard The Legend of Zelda: Majora’s Mask 3D’s hype train, Tecmo Koei is releasing the next DLC pack that happens to be based on that game and now we have the full rundown of what is included courtesy of 4Gamer.

During Wednesday’s Nintendo Direct, it was revealed that the two new playable characters found in the DLC were the always creepy Tingle, as well as Young Link. The latter is a unique choice that does fit the DLC pack quite well, though many were hoping to see Skull Kid. However, the ability to turn into Fierce Deity Link basically makes up for any of that.

Now, it has been revealed what else makes up this DLC pack and there is a little something to try and make up for the lack of a playable Skull Kid. In fact, you technically can play as that character, but as a costume for Lana. The other two costumes in the game are ones based off of the designs from Ocarina of Time for both Impa and Sheik. These are a nice choice to have that help to complete the Ocarina of Time costume line we started with Link, Zelda, and Ganondorf.

The last piece of the DLC is the Adventure Map, which we know takes place in Termina naturally. There also appears to be an 8-bit fairy that will show up with this DLC.

Look for the Majora’s Mask DLC pack to arrive for Hyrule Warriors in the US on February 5, only eight days before the original Majora’s Mask returns on Nintendo 3DS. Also, you can check out the full array of images that have been released for this DLC in the following pages.