4J Studios hasn’t yet announced what new features and items will be in the upcoming updates for Minecraft on the PlayStation 3 and Xbox 360, but a new update to the 4J Twitter account has fans examining a screenshot comparison for clues. 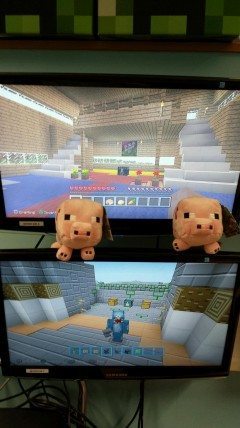 Under the guise of a picture of pig plushies, 4J Studios not only gives us a comparison shot of the PlayStation 3 and PlayStation 4 versions, but some new items as well. Eagle-eyed followers of the developer have spotted a number of things like Enderchests, carpets, and a Wither Boss.

4J Studios has been known to make teases like these in the past, so it’s a good possibility that these items will be included in the update. Just when will Title Update 14 arrive? That’s anyone’s guess, the developers have not announced a concrete release date on when to expect it.

When it does arrive, it should hit all platforms. 4J Studios is also working on PlayStation 4, PlayStation Vita, and Xbox One versions of the game.