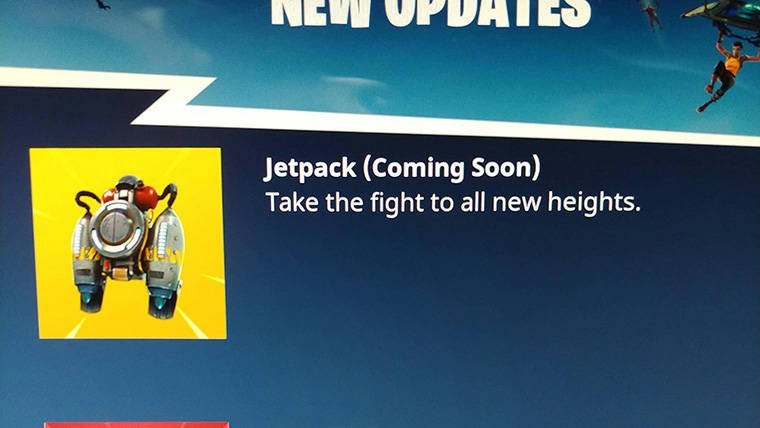 It looks like Jetpacks are making their way to Fortnite Battle Royale.  Epic hasn’t mentioned this new gameplay mechanic themselves, but someone caught a glimpse of the item in the “New Updates” section of the game that says that they are “coming soon.”

Just how these new jetpacks in Fortnite will function is anyone’s guess, but they’re likely to change the gameplay up significantly once they arrive.  Will they be some sort of Legendary or Epic Loot Drop found in the game, or will everyone be able to get a Jetpack in Fortnite Battle Royale?

The community for Fortnite seems to be divided on the recently discovered item.  Perhaps they’re having flashbacks to what jetpacks did to the Call of Duty series over the past few years.  The truth is, noone knows how Epic plans to implement the item and it’s highly unlikely that they’re going to make a huge misstep with Fortnite gaining so much popularity as of late.

A jetpack could change the game significantly, though.  It could allow people to rush bases in new ways, get to higher elevations without the need to build.  There are plenty of ways to speculate on how Epic could implement jetpacks into Fortnite, but for now we’re gonna wait for the official reveal.

Fortnite recently entered into Season 3, adding a host of new loot to earn in the Season 3 Battle Pass.  Fornite: Battle Royale is currently free to play on the Xbox One, PlayStation 4 and PC.