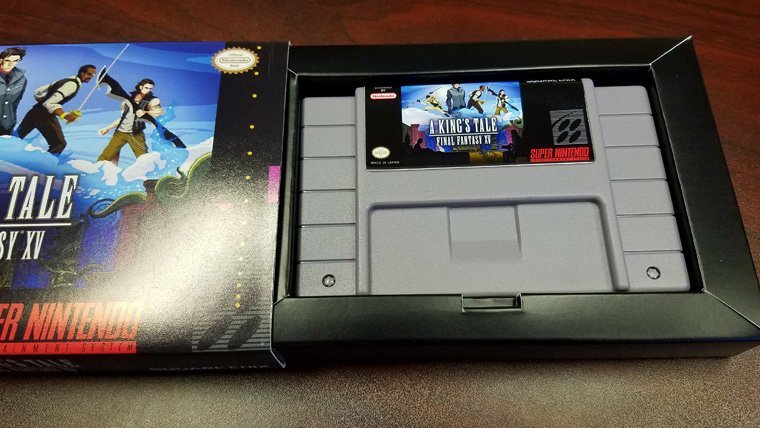 Square Enix has sent the developer team of A King’s Tale: Final Fantasy XV a series of SNES cartdriges featuring the cover of the game as a gift. The package includes a replica of a SNES cartdrige and a box with the same design that it was used in North America at the time. Not only the box features the cover art at the front, but it also presents a detailed description of the game in the back.

A King’s Tale: Final Fantasy XV is a spin-off of the best-selling RPG game styled as a 16-bits action game, in which players take control of a younger King Regis while he defends the city of Insomnia of an invasion of monsters along with his group of guardians. It is currently available digitally for free on PS4 and Xbox One.

Some of the key features mentioned in the back cover are the Deep Combat System, with combos, counters, and Regis’ signature “Warp Strike,” the three distinct companions that offer “unique and new ways to attack,”or the use of Fire, Ice, and Lightning magic.

While Square Enix has gone into every little detail to build a realistic replica, the only thing that breaks the illusion is that the cartdriges don’t actually work in a real console, as transforming the game into this format would have added a whole new level of complexity to the gift.

In any case, it’s still a very impressive reward for a job well done.