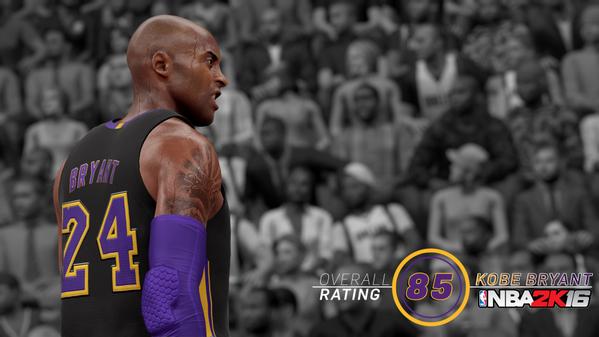 2K Sports has now revealed the NBA 2K16 player rating for Kobe Bryant. Some might say the rating is too low for someone as talented as him.

Ronnie2K tweeted out the photo you see above. The “Black Mamba” has a player rating of 85. This is the lowest rating he has ever received in a NBA 2K game before.

However, Bryant’s career is starting to wind down as he’s getting older. Not to mention he missed the majority of the 2014/2015 NBA season due to injury. This is just his rating for the current version of the player It’s likely the 2000/2001 version of Bryant will be rated higher.

It’s interesting that Kevin Durant has a higher rating of 91 even though he was injured for most of the previous season as well. Durant however is a younger player than Bryant and we have yet to see his full potential. This is probably why he got a higher rating.

Ronnie2k also revealed the player ratings for other stars in NBA 2K16. Terence Ross of the Toronto Raptors has a 73 rating in the game. Aaron Brooks of the Chicago Bulls has a rating of 75. Langston Galloway from the New York Knicks received a 72 overall rating.