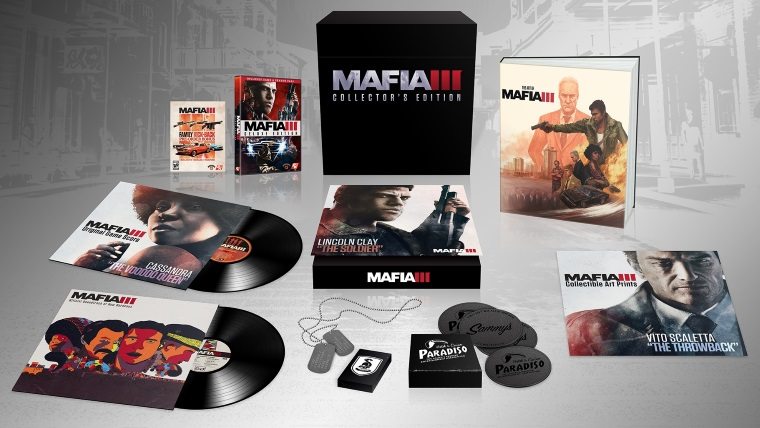 2K Games and Take Two Interactive have unveiled the Mafia 3 Collector’s Edition. Containing a massive collection of physical and digital items, the special edition of the game looks like a great new addition for fans of the series. We don’t yet have a price for this collection, but it could be pretty steep considering all that it contains.

The vinyl soundtrack contains a bunch of big hits, such as Paint it Black by The Rolling Stones, All Along the Watchtower by Jimi Hendrix, and The House of the Rising Sun by The animals. “The second disc contains the original game score of Mafia III. Gaming audio greats Jesse Harlin ( Force Unleashed, Secret of Monkey Island) and Jim Bonney (BioShock Infinite, Mortal Kombat) lent their talents to bringing the flavor of 1968 New Bordeaux to life. Take a Rhythm and Blues-inspired tour through a city ruled by organized crime and corrupt officials.”

The rest of the items are pretty nice little additions for fans, with a great looking art book, and some cool items from the game itself. “1960’s US military issue replicas, these are the tags of a combat-hardened Vietnam vet fueled by the need for military-grade revenge against the Italian Mafia”

Mafia 3 will get a full unveiling at this month’s E3 convention, so stay tuned for more updates.