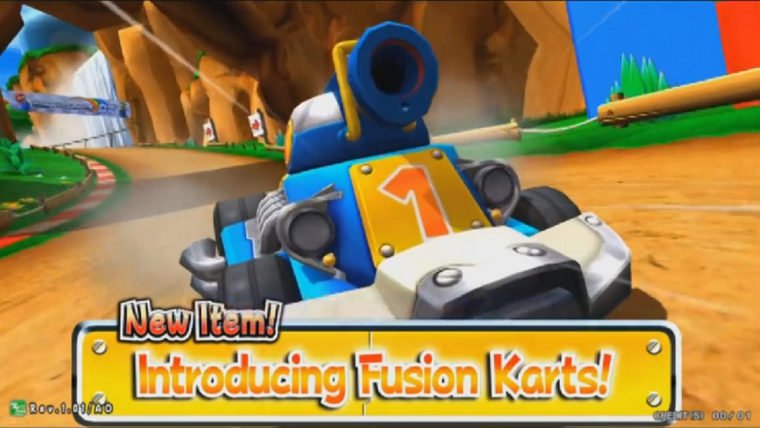 Originally released in Japan almost a year ago, Mario Kart GP DX adds in two player cooperative racing, which lets you work together to achieve victory. You will also be able to fuse the two player’s karts together forming a new vehicle.

Once fused the karts become a huge tank that is controlled by both players, one driving and the other shooting unlimited green shells. This might seem overpowered if it were added to a home console entry, but being in the arcade simply means you’ll place better before having to throw more quarters into the machine.

Other gameplay tweaks include the diving and gliding mechanics that first appeared in Mario Kart 7. These allow the game’s levels to feature more varied landscapes, such as underwater areas.

Mario Kart Arcade GP DX also adds in a new character with Don-chan from Taiko No Tatsujin. This is on top of the returning characters from the previous Mario Kart Arcade GP games, such as Mario, Yoshi, and Pac-Man. Many characters feature “palette swaps”, allowing them to look different than their normal model. Currently there is a Red Yoshi, Fire Mario, and Ice Luigi among others.

A total of 13 playable characters are in the game, with 9 available from the start, 3 being unlocked during play, and 1 that is downloaded online. Your progress in Mario Kart Arcade GP DX is saved using a special card in Japan. No word on how saves will work in the US, but it will likely be the same.

Mario Kart Arcade GP DX had a few test locations already pop up across the United States, but should get a full release some time this year. Be sure to check out your local arcade to find out if it will arrive soon.