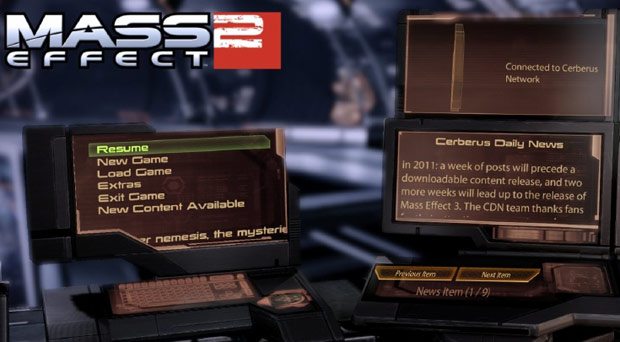 Mass Effect 2 was one of the best video games of 2010.  Mass Effect 2 will get a full release on the PS3, and Mass Effect 3 is on the way in 2011 as well.  Which makes right about now a great time to catch up on Mass Effect if you indeed missed this game at it’s initial release.

To those of you that have already played all there is be had in the Mass Effect universe, get ready for more.  Bioware recently announced that it will be adding new DLC to Mass Effect 2 via the Cerberus Network.

No specifics have been given at this time.  So it’s not clear if this will be free DLC, but the news module on the Cerberus Daily News section of the game told us that: “In 2011 a week of posts will precede a downloadable content release, and two more weeks will lead up to the release of Mass Effect 3. ”

Will it be a bridge between Mass Effect 2 & 3 before the new release?  Will it be much sooner?  Time will tell.