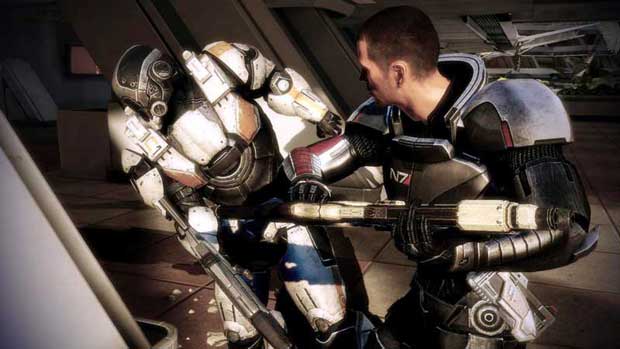 When Mass Effect 3 releases sometime in early 2012, Shepard will begin the third leg of his fight to save human kind.  Many things will have changed from Mass Effect 2 to Mass Effect 3, for one, Shepard will now be up against the Cerberus Corporation instead of working for them.  In a recent interview with Xbox World Magazine, Bioware talks about this new story dynamic in Mass Effect 3.

Regardless of how you finished off Mass Effect 2, Cerberus will not be on your side in Mass Effect 3.  From the onset of Mass Effect 3 it will be unclear why Cerberus is sending troopers after Shepard, but as the story unfolds, the Illusive Man will be re-introduced into the story as will the reasons that Cerberus is now your enemy.   “You were begrudgingly working for Cerberus in ME2,” said Casey Hudson of Bioware, “but they’ve gone a bit further and Shepard has returned to the Alliance so Cerberus troops are a major threat.”  “Cerberus Troopers can do everything that Shepard can do now,” added designer Corey Gaspur. “So your fighting a force that’s a lot more punishing.”

“We wanted to make it so that when the player’s fighting in the moment they feel like they have more options than aiming shooting and using powers,” added lead gameplay designer Christina Norman. “We really want to make mobility a factor that plays into combat. You’ll always ask yourself: “Am I in the right position on the battlefield? Where are my enemies? How am I going to get from point A to point B?’  “Players should never be walking into these safe places with great cover and stay there for the whole fight. It’s about how you’re going to move through the battlefield as the enemies through the battefield move through the battlefield and how they’re reacting to one another and to you.”

It sounds like these new enemies are going to make Mass Effect 3 a more challenging experience than ever.