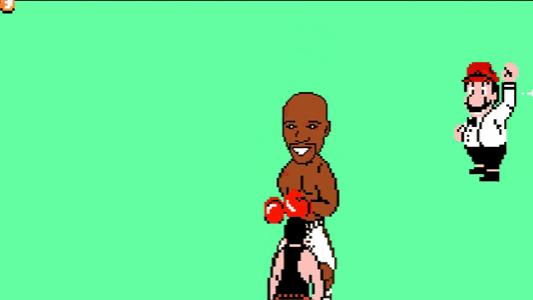 The “Fight of the Century” happened last night with Floyd Mayweather beating Manny Pacquiao. Noober Goober Gaming recreated the fight in the old Punch-Out game on the NES.

Instead of having to face Mike Tyson, this video has made Floyd Mayweather as the last boss in Punch-Out. Manny Pacquiao stars as Little Mac being the underdog needing to beat the undefeated champion.

If you missed the Mayweather vs Pacquiao match, you didn’t miss much. A lot of people didn’t have enough money to see it anyway. Tickets to the event cost 10,000 or more while watching it on PPV was around $90 – $100 in the USA.

In the real fight, many casual boxing viewers criticized Mayweather for being too defensive. It made the boxing match kind of boring to watch. Pacquiao on the other hand tried his hardest to punch Mayweather, but kept missing most of the time.

The hilarious video recreates Mayweather’s defensive style of boxing in funny fashion. It’s pretty funny and quite accurate on how the fight looked like to many people that watched it yesterday. There were no knockouts seen that’s for sure.

Arguably, the best part of the video is at the beginning where you have to agree to Mayweather’s terms before you can fight him.

Check out the funny video below: