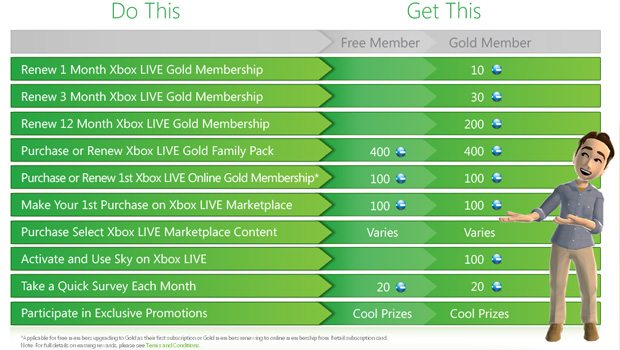 In case you needed any extra incentive to earn Xbox Live Achievements, and we’re pretty sure publicly visible bragging rights are more than enough for most, Microsoft has announced via its official Twitter account for the program that come this Fall Xbox Live Rewards will tie-in to your array of Achievements.

In case you’re unfamiliar with the way in which Xbox Live Rewards work, the program allots gamers MS Points when they participate in activities such as friend referrals and surveys. Renewing your XBL memberships, purchasing items on the Xbox Live Marketplace, and using subscription-based services like Netflix also can net you MS Points to trick out your avatar or shop around on Xbox Live Arcade.

Though Microsoft is currently not going into much detail as to how exactly Achievements will be supported by the program, we’re thinking and hoping that completing in-game challenges will earn us some digital spending money. There’s no better way to justify sitting on the couch for eight straight hours trying to complete a level without dying than to earn just enough Points to buy your Avatar that nifty hat you’ve been eying. To familiarize yourself with all the stuff you can currently do to gain free MS Points, check out the Xbox Live Rewards page.