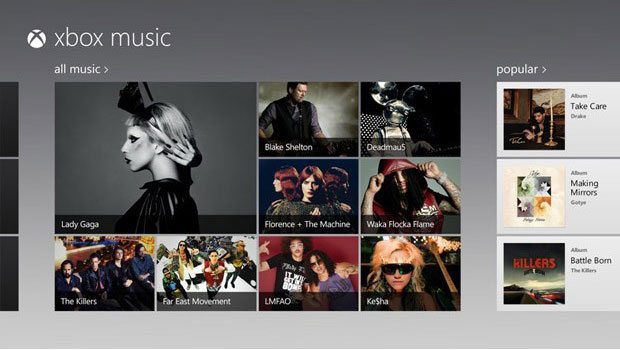 Microsoft is getting ready to toss their hat back into the music game with their upcoming release of the Xbox Music platform on the Xbox 360 and Windows 8 Operating Systems. On October 16th, the company will launch its Xbox Music program on the Xbox 360. This will mark the official transition away from the Zune platform and Pass that had been attached to the console.

For Xbox Live Gold users, the $9.99/mo or $99.90/yr service will allow users enjoy music on the console, and down the road on PCs, tablets, and smartphones. Currently, Microsoft has a catalog of over 18 million songs for US music lovers to enjoy if they’re willing to pony up the cash.

A free trial will be made available to the service, which will last 30 days.

Introducing Xbox Music: The Ultimate All-in-One Music Service Featuring Free Streaming on Windows 8 and Windows RT Tablets and PCs
Enjoy your favorite music from a 30 million-song global catalog powered by the one service that integrates your music experiences across your tablet, PC, phone and TV. All the music you love, every way you want it.

REDMOND, Wash. – Oct. 14, 2012 – Today, people need to use multiple music services to get exactly what they want. There are download-to-own music services, Internet radio services and subscription services that allow you to consume all the music you want. But, as more music services have emerged, it’s become harder than ever to enjoy the music you want – and to experience it the way you want it, on any device. Whether it’s music you’ve purchased on your smartphone, a music app on your tablet, listening to songs through the living room TV or turning to Internet radio on your PC at work, the music you love is scattered across different services. Enjoying music today requires too much work.
To solve this problem, Microsoft Corp. is introducing Xbox Music, the first all-in-one music service that gives you the freedom to stream custom-created playlists for free, subscribe to all the music you want or download-to-own your favorite songs. Through the power of the cloud, it effortlessly integrates the music experience across your tablet, PC, phone and TV.1 With more than 30 million songs in the global catalog, Xbox Music begins rolling out around the world tomorrow on Xbox 360 and later this month on Windows 8 PCs and tablets and on mobile phones, starting with Windows Phone 8 at launch and additional platforms later.
“The launch of Xbox Music is a milestone in simplifying digital music on every type of device and on a global scale,” said Don Mattrick, president of the Interactive Entertainment Business at Microsoft. “We’re breaking down the walls that fracture your music experiences today to ensure that music is better and integrated across the screens that you care about most – your tablet, PC, phone and TV.” 1
All the Music You Love, Every Way You Want It
Today, music is hard to manage, and no one has mastered ubiquity or created a service that works together to make music easy for the user. Xbox Music makes music simple by offering immediate and comprehensive discovery across the different types of devices you own, free streaming1 music on Windows 8 tablets and PCs, the ability to purchase songs and albums, a compelling music subscription, and artist-based radio. The all-in-one Xbox Music service includes the following:
• Free streaming1 music on Windows 8. Enjoy on-demand access to tens of millions of songs for free on all Windows 8 tablets and PCs. Discovering and enjoying free music on Windows 8 is as easy as typing an artist or song name and hitting “play” – songs are instantly available to stream and for you to create an unlimited amount of playlists.
• Xbox Music Pass. Want unlimited access to the songs and artists you care about, including offline access? Get an Xbox Music Pass for ad-free, unlimited playback of any track in our subscription catalog across your tablet, PC, phone and Xbox 3601 for US$9.99 per month.2 Xbox Music Pass also unlocks unlimited access to tens of thousands of music videos on your Xbox 360.
• Xbox Music Store. Want to own the music you love? The Xbox Music Store is a comprehensive MP3 marketplace giving you the opportunity to purchase a single track or entire album on your Windows 8 tablet or PC and Windows Phone 8.
• Smart DJ. Creating a new form of artist-based radio, the Smart DJ feature is a quick and dynamic way to personalize your collection, discover new favorites and create ultimate playlists by launching instant mixes based on your favorite artists. With unlimited skips and a view of the full recommended music stream, Smart DJ puts you in control of your Internet radio experience.
• Cloud Storage. Available in the coming year, a scan-and-match feature will take you beyond the 30 million tracks globally offered through Xbox Music. It will add all the music you own to your Xbox Music cloud catalog, including music acquired through other services. This means you can add any content you have to your personal Xbox Music collection, even if it’s not available in the Xbox Music catalog.
• Social Music. Xbox Music will add unique social features in the coming year that let you share your music experiences with friends and family.
• Platform Expansion. Xbox Music will become available on other platforms in the coming year.

Xbox Music isn’t just a listening experience that shows your tracks in spreadsheets and lists. Taking full advantage of every screen on which you enjoy music, Xbox Music elevates your music experiences with striking visuals. As you listen on your tablet, PC, phone or TV,1 your screen comes to life with artist photos, bios, cover art and discography.
Cloud Powered
The ubiquity of Xbox Music is powered by the cloud. Whether it’s free streaming2 on Windows 8, a subscription on Windows Phone 8 or tuning into a playlist on Xbox 360 – each experience is cloud-based for immediate access to your entire catalog, making music management simple. With the cloud sync feature, your favorite playlists are no longer held captive by the individual device on which they live. For Xbox Music Pass subscribers, you can create the perfect playlist on your Windows 8 tablet and see it automatically appear on your Xbox 360 or Windows Phone 8.
Music Heard Around the World
Xbox Music launches with a global catalog on par with iTunes, offering 30 million tracks from some of the leading music labels around the world. It will be pre-installed as the default music player on all Windows 8 tablets and PCs and on Windows Phone 8 smartphones, and it will be part of the 2012 console update for Xbox 360. Free streaming1 on Windows 8 tablets and PCs launches Oct. 26 in 15 markets worldwide. Xbox Music Pass will be available for Windows 8 and Windows Phone 8 in 22 markets worldwide; it will begin rolling out tomorrow on Xbox 360 in the same markets. Xbox Music Store will also be accessible on Windows 8 and Windows Phone 8 in 22 markets worldwide as devices become available. Microsoft will continue introducing Xbox Music in new regions around the world throughout the coming year.
About Xbox
Xbox is Microsoft’s premier entertainment service for the TV, phone, PC and tablet. It’s home to the best and broadest games, as well as one of the world’s largest libraries of music, movies, TV and sports. With Kinect, Xbox 360 transformed gaming and entertainment in the living room with a whole new way to play games and find entertainment – no controller required. More information about Xbox can be found online at https://www.xbox.com:443/en-US/.
About Microsoft
Founded in 1975, Microsoft (Nasdaq “MSFT”) is the worldwide leader in software, services and solutions that help people and businesses realize their full potential.
The information contained in this press release relates to a pre-release software product that may be substantially modified before its first commercial release. Accordingly, the information may not accurately describe or reflect the software product when first commercially released. The press release is provided for informational purposes only, and Microsoft makes no warranties, express or implied, with respect to the press release or the information contained in it.

1 Limited hours of free streaming after 6 months; unlimited with paid subscription. Compatible devices and Internet required; ISP fees apply. On TV, Xbox Music is streaming only and requires an Xbox 360 console and additional subscriptions (each sold separately). Some Xbox Music content may not be available via Xbox Music Pass and may vary over time and by region. See xbox.com/music.
2 Pricing will vary by region.