The latest news in the world of video games at Attack of the Fanboy
November 25th, 2014 by Kyle Hanson 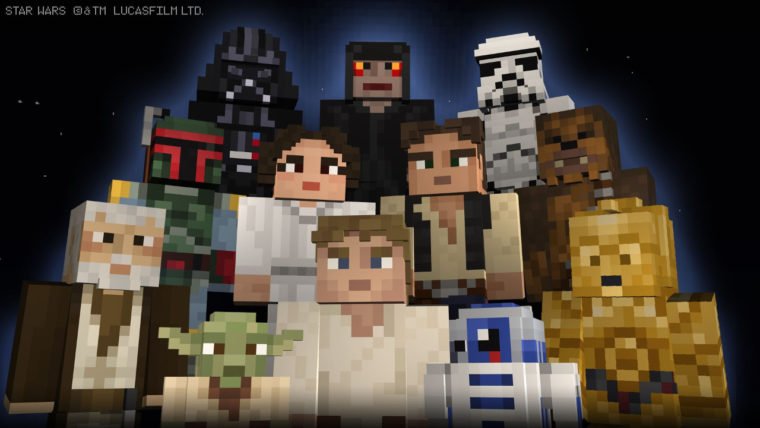 Starting today you can relive all of your favorite moments from the classic Star Wars Trilogy with the latest skin pack being added to the Xbox 360 and Xbox One versions of Minecraft. Dubbed the Star Wars Classic Skin Pack, the DLC contains over 50 new skins based on your favorite Star Wars characters. This includes heroes, villains, and rogues all from the original Trilogy, Episodes IV through VI and the Galactic Civil War.

The Star Wars Classic Skin Pack features an assortment of over 50 heroes, villains, and rogues from the Galactic Civil War.

The only disappointment with this add-on is that it isn’t the world-changing type that has been released for Halo, Mass Effect, and Skyrim. The only thing that you get for your $2.99 is some extra skins to use on your own character. The world will remain the same, and mobs will not be altered in any way. Still, you can create your own Star Wars-esque world if you want and then populate it with Han, Luke, Leia, or probably any other character you can think of.

The pack is available now on Xbox 360 and Xbox One. No announcement was made regarding PS3, PS4, PS Vita, or mobile platforms. It is possible that those will be skipped with this release as many skin packs have remained Xbox exclusive. Microsoft’s purchase of Mojang might also be a factor, although it seems to have had little effect so far.

The official description for the add-on pack reads “A long time ago in a galaxy far, far away…. The Star Wars Classic Skin Pack features an assortment of over 50 heroes, villains, and rogues from the Galactic Civil War. Whether you pick a Jawa or the mighty Darth Vader, you can play as your favorite Star Wars characters from Episodes IV to VI, Minecraft style.”