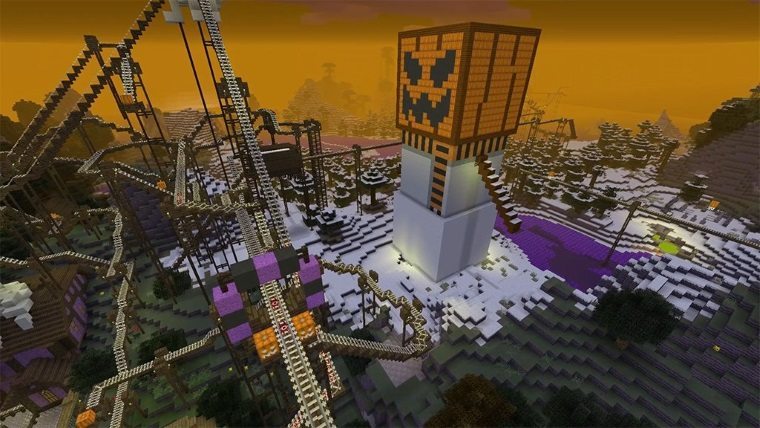 A new Minecraft update is rolling out across its many various console iterations. Minecraft Update 34 on Xbox One, though it has many different names depending on the platform, promises a bunch of the usual fixes, but is also jam packed with some new content for players to enjoy. These include some new Battle maps, as well as a bunch of Halloween themed items, including a new Spooky Bundle.

Here’s the official patch notes for Minecraft Update 34 on Xbox One: Added Halloween Battle Map. Added Campfire Tales Skin Pack. Added Battle Map Pack 4. Fixes for missing/incorrect tooltips when looking at various blocks and entities. Fix for Endermen not becoming hostile when a player makes eye contact with them. Fix for only one of eight Fossil variants generating per world. Fix for igniting TNT blocks while one is already lit causing them to disappear. Fix for crash that may occur if the Ender Dragon attacks a group of Zombies. Stop faster healing due to food saturation in Battle mini game. Updated Battle maps to remove some areas where players could get stuck. Fix for MCCE 2521 – Shears don’t break web blocks into Web block drop. Fix for MCCE 2505 – Knocking a Guardian off a height great enough to kill it on falling would cause a crash. Fix for MCCE-2478 – Oak and Iron Doors Items have the wrong texture in the Inventory. Fix for “Gray” being spelled as “Gary” for Banner patterns in UK English.

This update is also going out for PS3, PS Vita, PS4, Xbox 360, and Wii U, though the exact patch notes might be slightly different between the versions. Minecraft updates usually roll out over the course of a couple of days, with the different stores putting it up at different times. Keep checking to see when you can download it and get into all the spooky fun.