The latest news in the world of video games at Attack of the Fanboy
May 2nd, 2016 by Damian Seeto 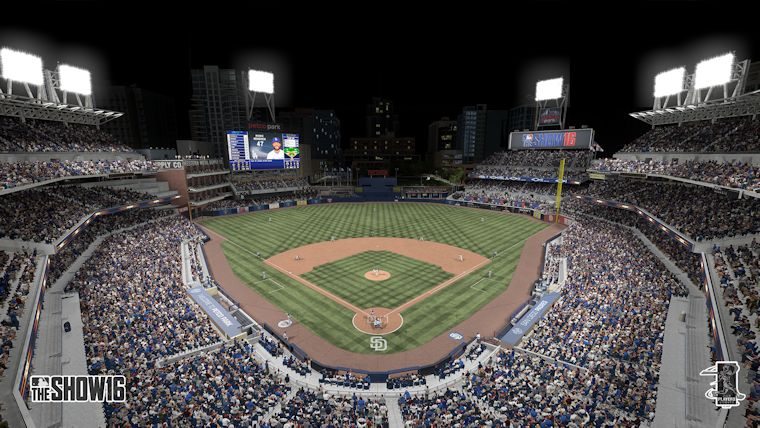 Sony has revealed all of the notes for update patch 1.04 for MLB The Show 16. Fixes have been made to both the offline and online modes of the game.

All of the update patch notes were revealed via the game’s official forums. It should be available for both the PS4 and PS3 versions of MLB The Show 16 and is downloadable now.

Offline Game-Play: Dynamic Difficulty is now working as intended while batting, The ball trail option will now correctly correspond in-game if set to off, or fade, Several adjustments were made to the auto base running mechanics during offline game-play.

Fixed an issue within RTTS while pitching with certain Perks equipped would result in a crash, Corrected the order in which the “Preloading a Throw” and “Double Play” tutorial appear, Following a Year to Year file upload in Road To The Show, the player card stats would display incorrect team and player info. This should now be corrected, Tweaks and adjustments were made to AI behavior and animations that should streamline game-play performance. Areas of adjustment include: Fielders tagging moving base runners, Routes to catch balls, running catch animations, Fielders correctly covering bases on complex double play situations, etc…

Within Franchise mode, some generated or additional players were listed as born in “Alaska” instead of their correct place of origin. This should now be corrected and no longer happen, Adjustments made to both online and offline pitcher/reliever energy levels.

Online Game-Play: Fixed a bug that could cause a loss for users who requested a friendly quit at certain times, Resolved a number of freezing, soft locks, instability and crashes during online play, Fixed an issue where a pitch could occasionally change path on its’ way to the plate, shifting from inside the zone to outside the zone within a frame.

Addressed an issue under certain circumstances a pitcher would automatically pitch when the batter came out of Batter’s Eye Cam.
Changes were made to the Batters Eye Cam: How long it can be used, how many times it can be accessed per at bat, etc… This should limit exploits, but keep the feature usable for its’ intended purpose.

We’ve shortened the total amount of pause time from 6 minutes to 5 minutes during an online game, The pitchers pitch type interface will now be hidden if the batter is using Guess Pitch or Pitch History (L2 Button). This should help the user who is pitching understand when they can and cannot start the pitching motion, Fixed a bug where the user was not being awarded the “Free Swings” trophy in an Online Home Run Derby if specific operations were being performed.

Audio: Resolved issues where in game intro/walk-up music would not play properly, Tuned commentary triggers to be more accurate in one-sided games, Reduced the amount of repetitive audio clips for specific players, Fixed an issue where player yells were being disabled through the controller within Road To The Show. An occasional sound burst could also occur during game-play.

Sony revealed that general fixes and issues have also been rectified in MLB The Show 16. They have also made adjustments to the servers on top of this.