The latest news in the world of video games at Attack of the Fanboy
March 14th, 2018 by Jose Belmonte 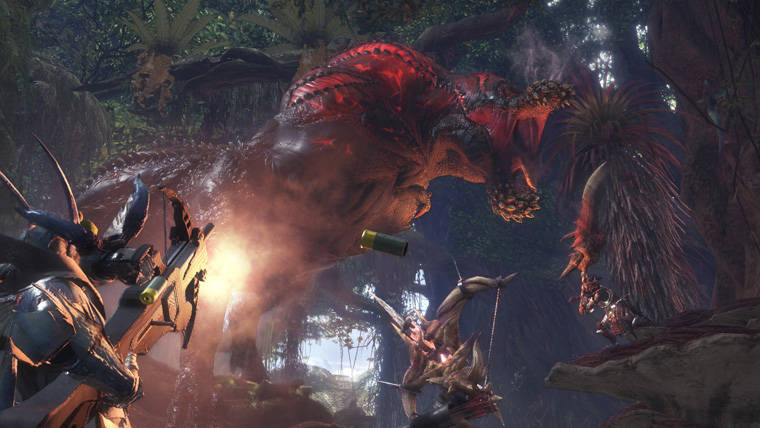 Capcom has revealed today all the details on the content included in the upcoming first major update of Monster Hunter: World, which launches on March 22. The package will be put available for free to all owners of the game, and it contains some elements and features that will sure grant players many additional hours of hunting joy. The main new addition of this pack is Deviljho, a new creature that longtime fans of the series surely know as one of the toughest enemies they have ever faced. This bipedal Brute Wyvern will prove to be a big challenge to all players, but in turn they will receive great rewards like the materials to craft the brand new weapons Vangis α and Vangis β, as well as new Deviljho-inspired versions of all the current 14 types of weapons.

Another of the new features of this update is the launch of the Spring Blossom Fest, an event that will run from April 5 through April 18 PT or April 5 through April 20 GMT, bringing fun activities, special decorations to the Celestial Pursuit and plenty of special-themed food. Through one of the event quests related to this festival we’ll be able to get the tickets necessary to craft the Mega Man gear and the Wyvern Ignition Great Sword.

The update will also implemente the following balance changes to certain equipment:

Finally, Capcom is letting players the chance to edit the gender and physical appearance of each player’s hunter, although this will be in the form of a one-use only token, so be wise about what changes are you going to make. For more information, visit Capcom’s Unity Blog.