The latest news in the world of video games at Attack of the Fanboy
July 4th, 2017 by Jose Belmonte 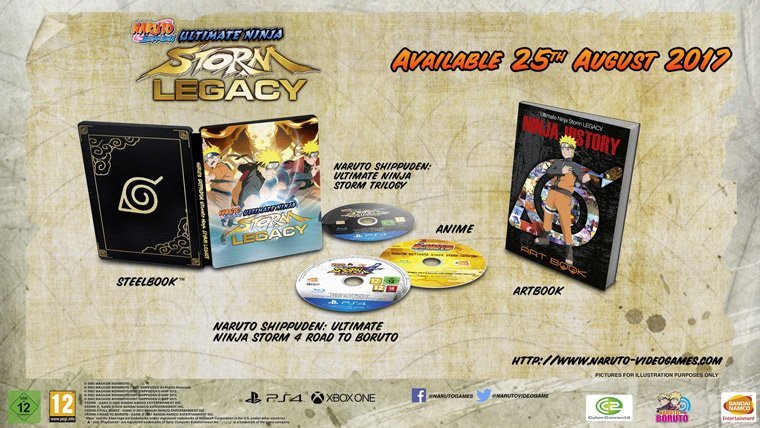 Bandai Namco is bringing to PS4 and Xbox One the original trilogy of their hit fighting series Naruto Shippuden: Ultimate Ninja Storm. The remastered version of these titles will come on August 25th as a ‘Trilogy’ set, containing the three games released on PS3 and Xbox 360, and as a ‘Legacy’ collection, which includes the remastered games plus last year’s Naruto Shippuden: Ultimate Ninja Storm 4. All titles will include their respective DLC missions and alternative costumes.

Ninja Storm Trilogy will only be available as a digital title in North America and Europe, however, the Legacy set (pictured above) will be released in a special edition featuring a steelbook with the game, an art book, and an exclusive 12-minute anime related to Boruto, the new series that expands the Naruto universe after the end of the anime. Japanese gamers have more luck, with the game launching there on July 25th, and both titles getting physical editions.

The new collection will allow fans to relieve the story of Naruto and all his unforgettable companions from the storyline of the original anime through the Shippuden arcs and the future with Boruto.

Naruto Shippuden: Ultimate Ninja Storm Trilogy and Legacy will be released for PS4 and Xbox One on August 25th in North America and Europe. Watch the announcement trailer below.